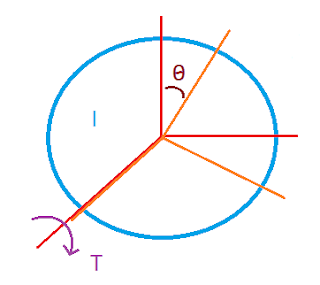 The amount a body will rotate is not based on force and mass, but instead it is based on the moment applied to the body (the Torque, T) and the body's moment of inertia (I). 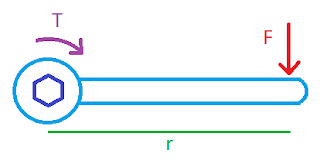 Torque (moment) is calculated from the equation:

A simple way of thinking about moment is a wrench tightening a bolt.

If the wrench was twice as long but the same force applied, then the calculated moment is:
T = 2 * 10 = 20 foot-pounds of torque

Which demonstrates the entire purpose of having long handles on wrenches! They allow people to tighten bolts with less force.

Since the entire simulation (and most of the world) uses metric, I'll be using metric for the rest of this post and the code. So our moment units will be Newton-meters rather than foot-pounds.

The torque equation I gave above was just for a single axis plane. The equation to cover a vector force in multiple dimensions uses the cross product:

This equation takes a vector force, F, and a vector position, r, to get the resulting torque, T, that is applied in all 3 axes. 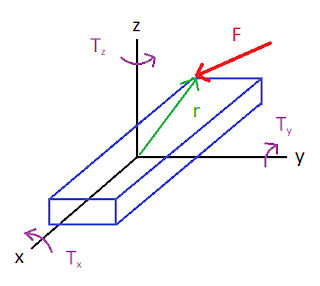 In this diagram, a force vector, F, is applied at the corner of a block with the force location represented by vector r. The torque cross product equation gives the resulting torque in all 3 axes.

For more information on the cross product, see https://en.wikipedia.org/wiki/Cross_product The Vector class has a static function for calculating the cross product which the simulation code below will use.

Uniform Solid Sphere (moment of inertia same from any orientation): 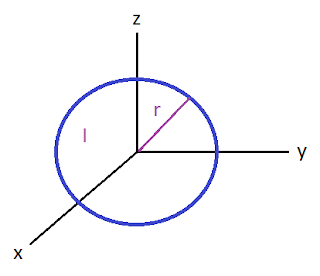 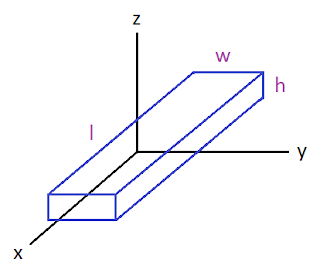 What happens if you have a more complex shape? (Two spheres at the end of a long block.) Or you're rotating somewhere other than the axis that the moment of inertia equations were referenced from? (Rotating from the end of the block rather than the center.) In those situations, you use the Parallel-Axis Theorem to recalculate a new moment of inertia.

Currently in the Orbital Aero Model, all bodies are single uniform spheres. I have plans to make it so bodies can consist of one of a variety of basic shapes or a combination of many basic shapes to form complex shapes. So I'll hold off on covering the parallel axis theorem until I complete that code.

In our prior function calls, we calculated the total moment applied to the body. Since we know its moment of inertia, it's easy to calculate acceleration:

T is the torque, in newton-meters.
I is the moment of inertia, in kilogram meters squared.
alpha is the angular acceleration, in radians per second squared.

And with the angular acceleration, we can rotate the object:

The smaller the time step the more accurate the simulation. However, that also means it's more computational intensive for simulating the same duration of time.


Now that all the background math has been covered, let's see how it's represented in code.


I'll demonstrate 2 ways of calculating and applying a moment to a body.


This approach would be more for satellites with reaction wheels. Rather than expelling force via a rocket to rotate the vehicle, an electric motor attached to a flywheel spins causing the vehicle to counter-rotate. https://en.wikipedia.org/wiki/Reaction_wheel

// All thrust is along the x (forward) axis of the entity.
double thrust_newtons = hostOrbitalAero.joystickInputs[this->joystickInputsIndex].thrust * 1000.0;

Orientation Thrusters / Calculate Moment from Rockets at Edges of Body


This approach is more inline with the Space Shuttle's reaction control system. https://en.wikipedia.org/wiki/Reaction_control_system A combination of small thrusters on various parts of the spacecraft are fired for attitude adjustments. (They could also make translation adjustments if opposing thrusters are not fired to counteract the force applied.)

The code below models 6 thrusters for orientation control. There is a pair for each axis; one on either side of the body. For any thrust created on one side, a thrust in the opposite direction is created on the other side so that the body only rotates (no translation).

These thrusters pretend they can create force in either direction, which in reality you wouldn't do. (Rocket nozzles point in one direction, not two.) Really this is 12 thrusters with math simplified for 6. That's not many though, the Space Shuttle had 44 of these! (But those were also used for minor translation changes and as backups in case of malfunction.)


Kinematics have been updated to calculate the angular acceleration from the applied moment and moment of inertia.


Copyright (c) 2017 Clinton Kam
Permission is hereby granted, free of charge, to any person obtaining a copy of this software and associated documentation files (the "Software"), to deal in the Software without restriction, including without limitation the rights to use, copy, modify, merge, publish, distribute, sublicense, and/or sell copies of the Software, and to permit persons to whom the Software is furnished to do so, subject to the following conditions:
The above copyright notice and this permission notice shall be included in all copies or substantial portions of the Software.

THE SOFTWARE IS PROVIDED "AS IS", WITHOUT WARRANTY OF ANY KIND, EXPRESS OR IMPLIED, INCLUDING BUT NOT LIMITED TO THE WARRANTIES OF MERCHANTABILITY, FITNESS FOR A PARTICULAR PURPOSE AND NONINFRINGEMENT. IN NO EVENT SHALL THE AUTHORS OR COPYRIGHT HOLDERS BE LIABLE FOR ANY CLAIM, DAMAGES OR OTHER LIABILITY, WHETHER IN AN ACTION OF CONTRACT, TORT OR OTHERWISE, ARISING FROM, OUT OF OR IN CONNECTION WITH THE SOFTWARE OR THE USE OR OTHER DEALINGS IN THE SOFTWARE.
Posted by Clint at 10:11 PM