Game Business: What Age Range Can I Market My Board Games To?

(The following is based on my limited understanding of toy regulations as of early 2019. All of it may be totally wrong; just use it as one more bullet point in your quest to sell games.)

So what age range can I market my board games to?

Several years ago (after it sounds like a lead paint scare from toys made in China), the U.S. (and E.U.) enacted some over the top regulations concerning children's toys. Basically every toy marketed to a child under the age of 12 has to have every component thoroughly tested before it could be offered for sale.

Doesn't sound too bad right? Well here's where it gets stupid. It's the final game that has to be thoroughly tested, not the components from the suppliers. It doesn't matter if Supplier A and Supplier B have passed testing, when I offer those 2 items combined in a game I have to have it retested by a third party. At the cost of a few thousand dollars. Well if you're Hasbro and you're selling a million of something, that's a rounding error. If you're just a guy trying to offer a compelling product to a niche market where your profit is likely sub $1000, you're screwed.

(From what I've read all of this is very similar in the E.U., but I don't know details.)

The U.S. Consumer Product Safety Commission is the enforcing arm in the United States of this law. Their website is hit or miss on how well they explain things, but potentially the most important link to read: 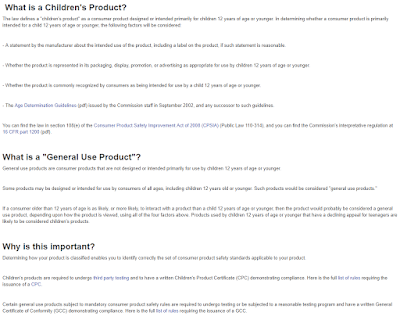 There is an exception for small businesses selling children's products with low print runs. Some products don't have to be third party tested if you're a small business, with very low print numbers, and you have documentation from the suppliers that the toys are clean.

Sounds great, right? So that means I can market to any age because I'm a small business using The Game Crafter as my printer? But I'm not selling the games directly; The Game Crafter is. And they're too big / print too many games to qualify under the exemption. That is why The Game Crafter doesn't allow games to be marketed under the age of 12.

And according to the CPSC (from that first link above), you can't make a children's game and just slap 12+ on it. The style of the graphics, gameplay, and how it's marketed determines the age range.

So does that mean any game I create can only appeal to teens / adults? Not necessarily... If my game falls under "General Use", then the age range is more flexible without the third party testing. (Checkers is an example of General Use.)

This is the point I'm going to introduce the Small Business Ombudsman, they're a resource from the CPSC to help people like me understand the rules.

I contacted them and they were very friendly and tried to help in clarifying the CPSC rules. Additionally, they offered to review my game and marketing materials to offer their opinion on the category and age range it should be assigned.

(Please note: I found the Ombudsman to be great over the phone but not very responsive to e-mails. If you decide to e-mail them and you don't hear back within a few days, give them a call to follow up. They can look up the e-mail you sent while on the phone.)

I e-mailed the Small Business Ombudsman a sample of graphics from Slay the Oly Dragon and my marketing points. A couple weeks later I had a follow on phone call and heard the determination... From their initial review, my game could be considered a "General Use Product, ages 9+"! Which is to say it's not a product primarily for children 12 and younger. Adults, teens, or kids under 12 may all have enjoyment out of the game.

I'm very happy with the assessment. The game is meant to be an uncomplicated counter to the other role playing board games on the market. Not just enjoyable for kids, one of my coworkers liked it because you could do dinner & game night without spending half the evening figuring out the rules. This was not official testing; I can still get official testing to confirm an age range if I wanted. But it was great news to hear!

They didn't say this specifically, but I think the following is what pushed Slay the Oly Dragon to "General Use, 9+":
- The game is relatively simple for teens and adults but still fun, it's not just for younger kids.
- Art was not geared to small children. I did censor out the blood on the zombie so I wouldn't have to check a "gore" checkbox on The Game Crafter, but the artwork goal was realistic rather than cartoonish.
- The Encounter & Loot cards are physically full size (not smaller / children size).
- There are tactical decisions where a player's higher skill results in better play. (Contrasted to other children's games that are essentially pure luck.)
- My marketing did express that the game was quick to setup with straightforward rules, but nothing specifically targeting very young kids.

As a "General Use" board game, it is not subject to CPSC testing, labeling or certification requirements. Also as a general use product, I'm not required to have an age range printed on the box. I could put 9+ or 12+ on the box if I wanted to (but I can not go below 9+).

Since The Game Crafter does not allow listing below 12+, I'm opting to not put an age range at all on the outside of the box. My game can be enjoyed by 9 year olds, so I don't want to limit the box to say 12+. And I don't want to put 9+ on the box only to have it conflict with 12+ advertised on the website.

I also asked the Small Business Ombudsman about the "WARNING CHOKING HAZARD Small Parts" label you see on so many boxes. For games such as this one (target ages 9+) it does not need to be included, but it's ok if I do.

What it Comes Down To

If a game can be enjoyed by teenagers and adults, then it may be a general use game and not subject to testing requirements. So making a game specific to children is a pain in the butt, but making a game that can also be appealing to children is not. And honestly any game I make I want to also enjoy playing so that's fine by me!

(And of course everything I say above may be completely wrong...)
Posted by Clint at 12:57 AM

Email ThisBlogThis!Share to TwitterShare to FacebookShare to Pinterest
Labels: board game, business