We frequently lose power in the fall/winter months, and no power means no lights, no refrigerator, no water, and no heat. We had a portable generator and ran extension cords into the house through a cracked door, but that was far from ideal. (And even though the generator was several feet from the barely cracked front door with foam filling the gap, I can still confirm the Carbon Monoxide detector in the house works.)

A very cheap and relatively simple way to tie a generator directly into the house is via an interlock switch. Add a inlet to the outside of the house wired into a circuit breaker in the main electrical panel. The interlock is a simple strip of metal that slides up or down to prevent both the utility main and the generator inlet from both being engaged simultaneously. (Very very bad things happen if utility main power can get to the generator and very very dangerous situations happen if the generator is back filling power to downed power lines.)

Another option is to use a Transfer Switch, but that requires far more wiring as you have to pick specific circuits to be powered by the portable generator and wire them into a separate electrical panel.

The only 2 upsides I know of for a transfer switch is:

1. With an interlock switch, you have to make sure to not enable power hungry devices such as ovens and electric furnaces. With the transfer switch those aren't even available to turn on.

2. With a transfer switch, you can leave the main power enabled so you can know when the power is restored to the house to those few circuits that aren't on the transfer switch.

However the interlock is cheaper and far simpler overall. Definitely the way for me.

There are far better tutorials than mine online on how to do this; the following is really just notes to myself and ways to share it with others I know that are interested in doing it. Disclaimer: The work was permitted / inspected / approved, but I'm not an electrician and you shouldn't trust anything I say.

I patched up a prior hole in the wall that was an old dryer vent. It's at a perfect place underneath the panel and I want to cover up how ugly it looks anyways. Here's a picture of the patched exterior (paint still drying) with a coupler to guide the wire into the house. (I saw other installers just pushing the wire directly through the wall and caulking around it, but that looked pretty poor to me. I like this much better.) 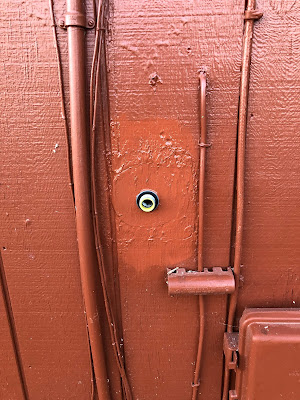 And on the inside... (That's construction adhesive around the patch.) 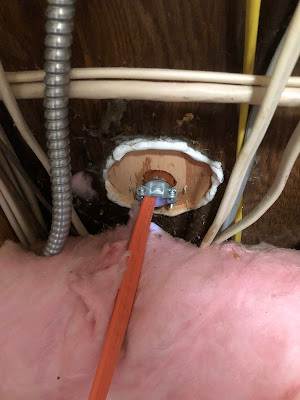 Total cost for the mini conduit piece and wire clamp was less than $5.

For the plug itself, I went with the Reliance 30-Amp Generator Power Inlet Box for $49.98. I picked it up at the local Lowers but it's readily available online. 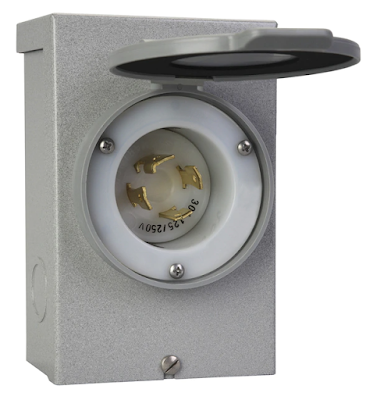 The 4.5 out of 5 stars is no surprise, this is a great inlet box. It takes the typical 240V 30 Amp generator extension cord and can be wired to the house panel. 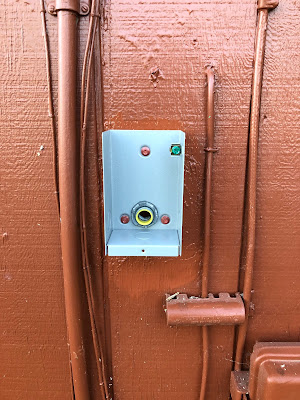 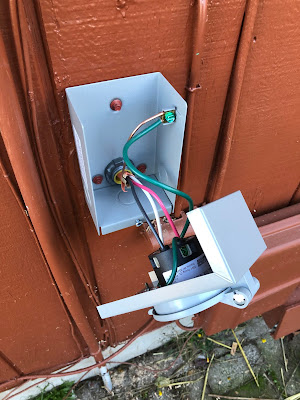 This wire is only for interior applications; if you're connecting to anything outside the house then you'll need the exterior grade wire instead. Apparently even though my inlet box is mounted on the outside wall of the house, it's still ok to use the Romex NM-B as it's considered interior wiring.

Routing the wire into the panel... 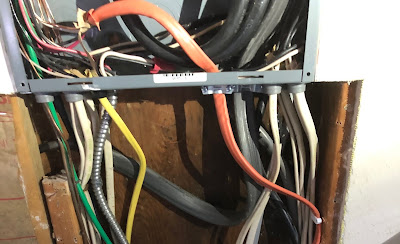 Now comes the most difficult part of the whole thing. You must get the proper interlock kit for the panel, and the descriptions on local hardware stores and Amazon are not clear what they're compatible with. I ended up getting part numbers off my electrical panel and contacting Square D customer support. They replied back with the exact interlock kit I needed: "Square D HOMCGK2C Homeline Cover Generator and QOM2 Frame Size Main Breaker Interlock Kit", and it fits perfect.

The interlock kit includes a clamp down for the breaker (required by code for any breakers that supply power into the panel) and the metal slide that prevents both the generator inlet and main power from both being simultaneously engaged. $42.89 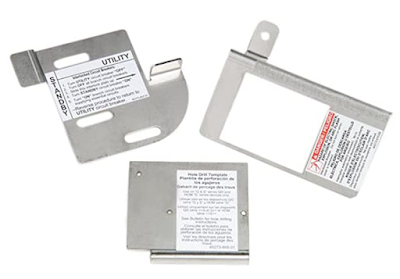 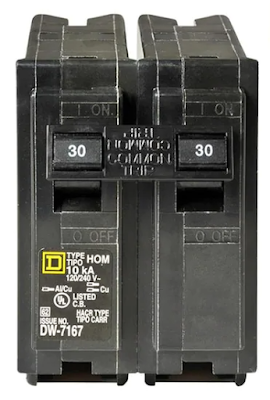 And here is the installed breaker with the clamp supplied by the interlock kit. The inlet breaker must be installed in a specific spot so the interlock switch can slide over it. I ended up having to move my 240V breaker for the water pump from the bottom left breaker (position 2/4) to the top to make space available. 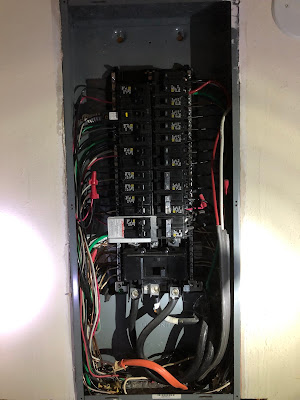 Mounting the slide was actually a piece of cake. It comes with a template that slots into the holes of the panel cover. Drill some pilot holes with a smaller drill bit then go back with the larger bit. Then you just tighten the slide on with the supplied bolts. 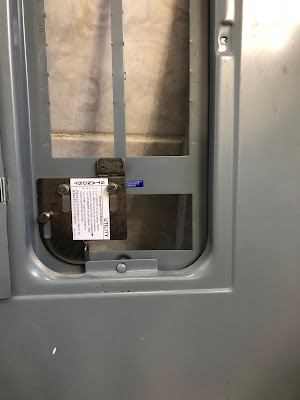 The only problem I had in this process was when the wind blew my instructions onto the only fresh pile of chicken feces on the front porch. 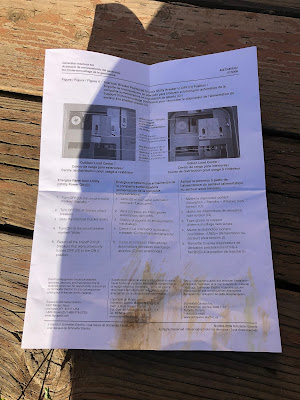 Panel cover back on... 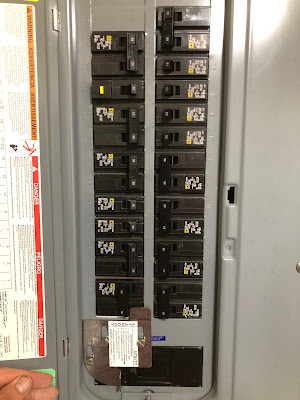 So the panel is good to go now, but the generator needs a bit of work.

Main utility power is a pure 60 Hz sine waveform. That's considered clean power and is what AC (Alternating Current) devices such as refrigerator compressors, water pumps, etc. expect. Portable generators can deliver power as a modified sine wave (basically a square wave or close to it) or a pure sine wave. They're both at 60 Hz, but the square wave shape is not the clean waveform the electrical device is expecting. If the generator creates a pure sine wave, then it's called an "Inverter Generator".

Having a modified sine-wave go through AC motors such as compressors and water pumps can generate additional heat and decrease the life of those devices. How much so? Hard to know. But it made me nervous enough to not want to have my devices on modified sine-waves for extended periods of time. Inverter Generators are more expensive than their modified sine-wave counterparts, but the piece of mind of not worrying if I'm damaging my equipment is worth it.

Of Note: I have an older modified sine-wave generator that I originally planned to run into a UPS then on to my electrical devices. However, standard UPSs will completely reject dirty square wave power and will not charge from them or clean up their power. You can buy UPSs that will accept the dirty power and clean it up to a pure sine wave, but they're so expensive you might as well get an Inverter Generator to begin with.

I ended up buying a Champion 6250-Watt DH Series Open Frame Inverter with Quiet Technology for $1032.17. 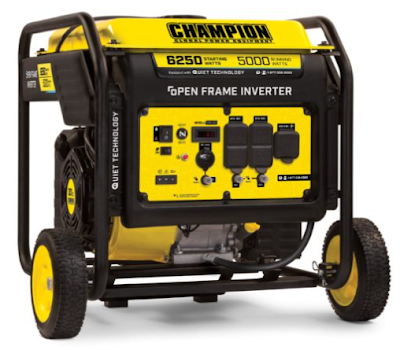 It is an "Inverter Generator", has a relative highly continuous load rating (5000 watts), delivers 240V via L14-30R outlet, has very nice maintenance accessibility, and solid reviews. I'm not powering an electric car charger or my electric furnace with this, but it has enough continuous power for the house lights, water pump, refrigerator, and wood pellet stove (to keep the house warm).

One gotcha with tying the generator to the house is whether or not it has a bonded neutral. The 240V L14-30R outlet has 4 wires - 2 hots, 1 neutral, and 1 ground. These portable generators are meant for taking out to a job site, starting them up, and plugging the tools in. For that typical use-case, the generator comes delivered with a bonded neutral - the neutral wire is connected to the frame of the generator alongside the ground wire.

There are plenty of warnings out there to not modify your generator and to use a special GFI transfer switch instead to solve this ground loop problem. However, the official Champion website has instructions and a video explaining exactly how to disconnect the neutral wire to get a "floating neutral". The generator would no longer be safe as a portable device on a job site, but it would no longer have the ground loop problem when tied into the house.

Note on the front of the generator: "NEUTRAL BONDED TO FRAME". 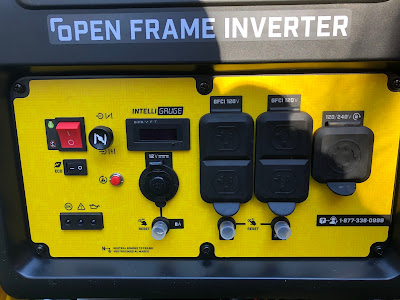 If I used a multimeter to check continuity between the neutral and ground of the 240V outlet, there was no resistance.
The steps are super easy; this generator was definitely made with intention of swapping the neutral connection. Remove the front panel. 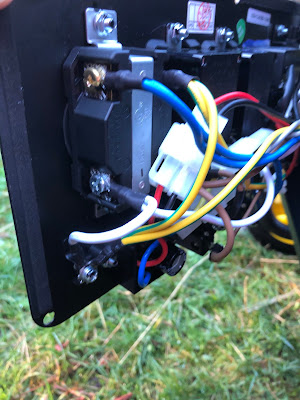 The corner terminal has a white wire (the neutral) and a couple ground wires (yellow/green) connected to it. All that has to be done is the neutral wire removed from that bolt and wrapped up so it can't connect to anything. 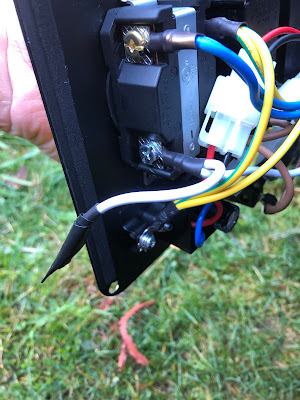 Reattach the front panel and use the multimeter to confirm that I now have a floating neutral; the neutral is no longer bonded to ground. 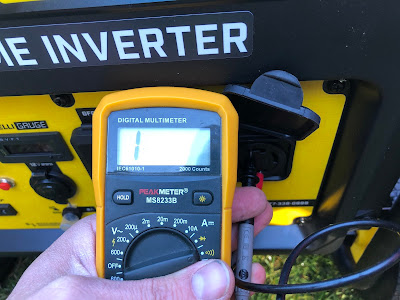 Last item to buy was a 15' 30 Amp rated extension cord with NEMA L14-30P/L14-30R ends. After the inspector approved of my wiring, we did a successful test! 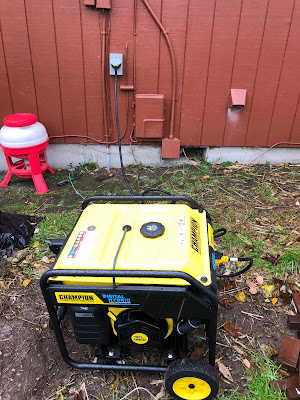 Again I'm not a professional; this is what worked for me and I have yet to burn anything down.