Last month I mentioned populating standard damage attacks, special damage attacks, and healing for all 240 player/NPC character types (level 1 through 20 of fighter, druid, paladin, wizard, etc.). This past month, the same data (and more) has been populated to every monster type in the SRD 5.1 document. All of which was necessary for the new Combat Evaluator. The Combat Evaluator tool aids game masters in balancing combat their players may encounter. Players and character assets are added to each Team and the results of the engagement calculated. 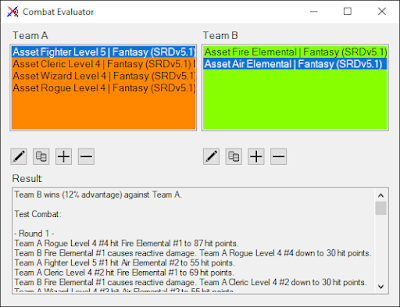 The victorious team is color coded - green for the winning team and red for the losing team. The colors will show gradients depending on how overpowered one team is versus the other. The advantage shows how much more additional attack and healing one team would require to win. In the above screenshot, Team B wins with a 12% advantage - meaning Team A must roll 12% higher than average on all of its healing and attack rolls to succeed.

The lower section shows an evaluated combat with no advantage given to either player. It includes how much power is left for the winning team at the very bottom. 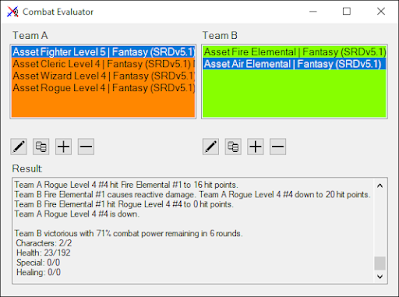 The evaluation doesn’t take into account players that execute surprise attacks using meticulous plans, expert tactical decisions during a turn, or unbelievably lucky rolls. Instead, it computes using average rolls and typical attack patterns. If a combat is reported near-even, and the players perform very well - they should win. If the combat is reported near-even, and the players perform very poorly - they should lose.
Also of note - no random numbers are used in the combat evaluation. The evaluator will return the exact same results given the same input every time. For example, if an attacker’s chance to hit is +10 and the defender’s chance to defend is 20, half damage is always applied to the average attack roll - as that is the damage that would be dealt averaged across hundreds of turns with random valued attacks. 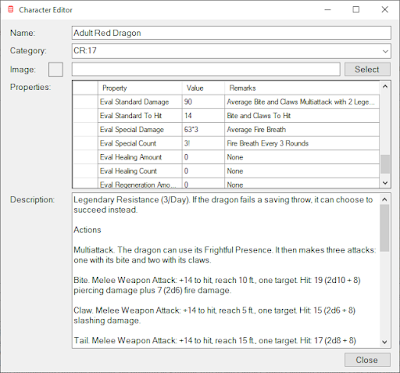 "Eval Special Damage" can include "*#" to denote damage may be applied to multiple characters.

"Eval Special Damage" can include "/#" to denote damage may be divided to multiple characters.

"Eval Healing Amount" can include "*#" to denote damage may be applied to multiple characters.

"Eval Healing Amount" can include "/#" to denote damage may be divided to multiple characters.

"Eval Special Count" can include "*" to denote bonus action.

"Eval Healing Count" can include "*" to denote bonus action.

"Eval Reactive Damage" can include "*" to denote damage dealt when killed.

If something is denoted as a bonus action, then it is used simultaneously with the standard attack or healing. Healings are performed when a fellow teammate is down or if multiple healings are available and a teammate is low. In the above Adult Red Dragon asset, the Fire Breath damage from a special attack is applied to 3 characters each time it is used, and it is available every 3 rounds of combat.

The Combat Evaluator is also accessible from Encounters that have engagements defined. The configured players are automatically added as Team A and the Engagement creatures as Team B. 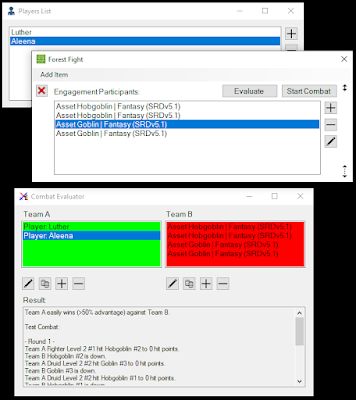 In the above example, there are players “Luther” and “Aleena” which are set to use Fighter Level 2 and Druid Level 2 in their player configurations respectively. There is an encounter with an Engagement against 2 hobgoblins and 2 goblins. When “Evaluate” is selected on the engagement, a Combat Evaluator is opened putting the players against the engagement participants.

Although I've gotten better at balancing combat for my DnD players over time, it's still very difficult. I've found the monster "Challenge Ratings" to be mediocre guidelines at best. For a combat to be challenging the total challenge rating I throw at my players is usually double their player levels. There must be a better way...

Which is why I've been assigning standard damage attacks, special damage attacks, and healing information to all 240 character types this past month. Next month I will continue assigning the same values to all SRDv5.1 monsters. And all this information is for a new combat evaluator function. 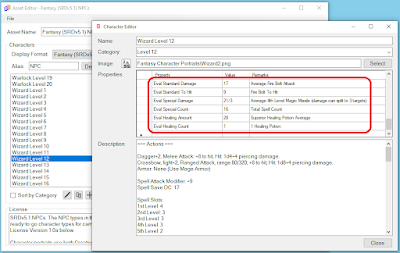 The combat evaluator takes in characters' hit points, initiative, and the many new properties I've added to play out a mini combat turn by turn. I'll post a more detailed explanation later of how it works, but it looks quite promising! It's not ready for release yet but likely in the next month or two. 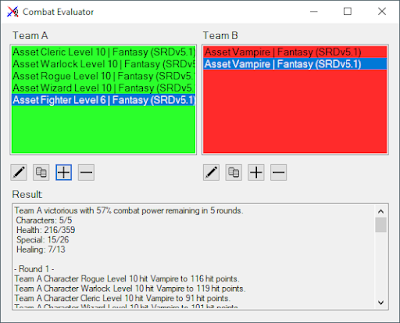 For Campaign Manager, 240 characters were created, but the user interface was more like a parameter dump rather than an appealing character sheet. The update this month is a presentable display of characters, items, and spells similar to how DnD sheets look. Additionally, almost 200 fantasy character portraits are included that can be applied to a character asset. 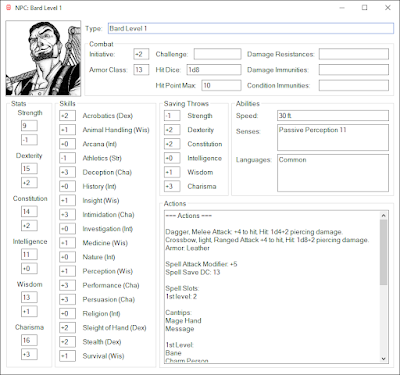 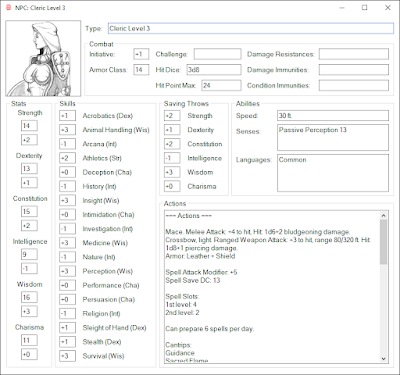 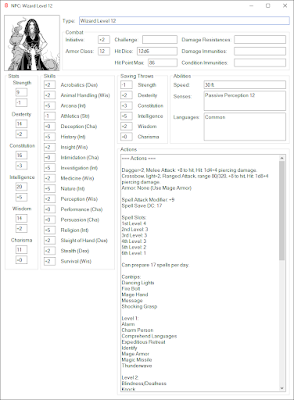 This past month the data for all 240 characters has been standardized and even more details added to them to make their use even easier. 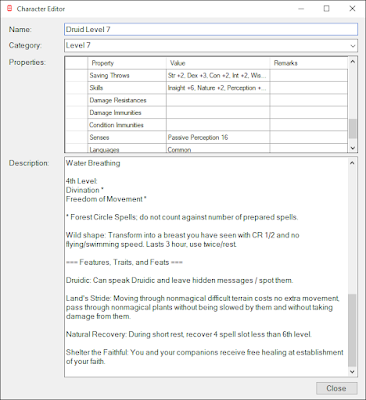 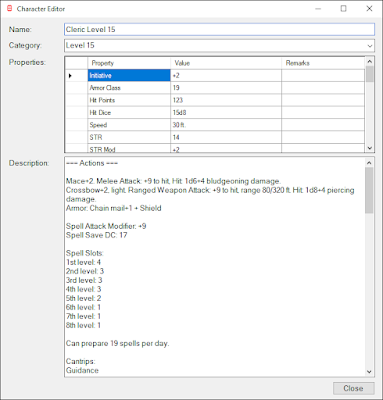 The plan next month... an alternative user interface so instead of a (usable but less than ideal) parameter dump, the character details will be displayed as they would be on a Character Sheet. I'm looking forward to how this will turn out - it will really help convey how useful the underlying data within Campaign Manager can be to a tabletop RPG game master.

Campaign Manager: Ready To Use Characters

​This one took a bit of time, but every class in the SRDv5.1 documentation (Barbarians, Bards, Clerics, Druids, Fighters, Monks, Paladins, Rangers, Rogues, Sorcerers, Warlocks, and Wizards) now have ready to go characters from level 1 all the way to 20. 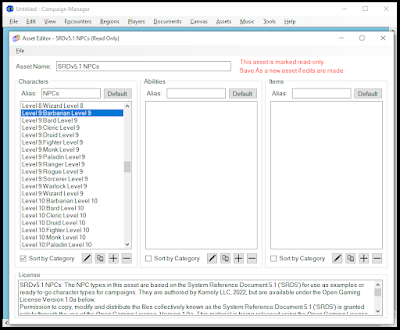 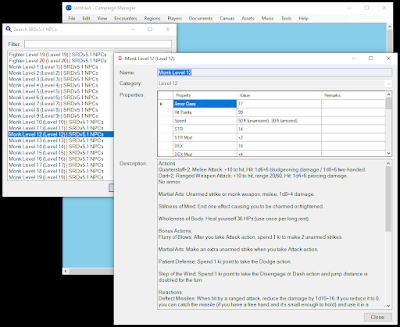 Need a Druid NPC your players meet up with in the forest? Pick the level of Druid that best aligns with how much support you want it to provide. The Druid has ready to go stats, appropriate weapons for its level, and spells already selected and ready to cast.
Want an opposing Monk the players must battle? Pick the one that gives the challenge you desire. The Monk has not only its basic information (stats, hit points, weapons) but also all its special Ki abilities with their descriptions.
Got someone new to tabletop role playing games that is trying it out for the first time or even someone experienced that is just playing for a session or two? They can pick from their desired class and your specified level and jump right into the game.
I'd like to go back through and expand a few details for some of the classes and standardize everything a bit (the last class I did was better than the first!). But as it stands, this is a huge help for campaign building, managing for the game master, and helping players. 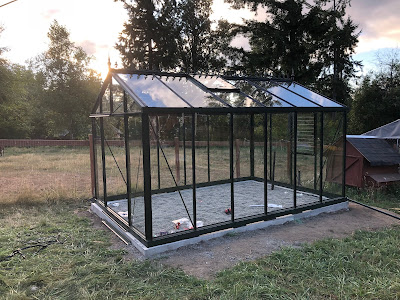 Email ThisBlogThis!Share to TwitterShare to FacebookShare to Pinterest
Labels: greenhouse

Many small improvements have been made throughout the Campaign Manager software, but the major update this release is the "continuous canvas". There is no longer any need to manually define the size of the canvas where encounters and regions reside. The canvas and scroll bars automatically shrink/grow as the user creates components, zooms, and pans. 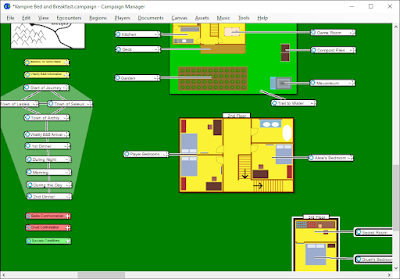