I've been running a DnD campaign for a couple years now. It's not only my first time being a dungeon master, it's basically my first time playing DnD. (Had 2 single sessions attempts as a player before that didn't continue.) The vast majority of my Dungeons and Dragons knowledge before playing came from listening to Critical Role Campaign 1, which is quite a few hours of education.

My campaign began with the DnD Starter Set, but I diverged pretty far by the time the players reached Wave Echo Cave. Before they reached the cave, I had added in hooks for future places to go and gone totally homebrew.

To organize my sessions, I've been using folders for each area the players may go to. The folders contains maps and text files of what they may encounter. There are references within one text file that may point to other folders or text files. I also attempt to play music during my sessions based on if the players are outdoors, in a tavern, in a battle, etc. However I frequently forget to swap it out when appropriate.

I've seen a variety of online tools for battle maps and individual encounters, but I didn't see a good way to manage your entire campaign. (Admittedly, I didn't look that hard. It's fun making my own program tailored exactly to what I need, so I did that...) 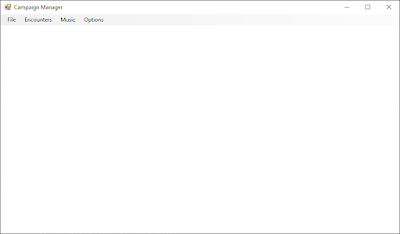 It is now at minimum-viable-product stage. You can add encounters, link them together, play music, and save and load the campaign.

Encounters are the individual pieces of a campaign. On the overview window for any encounters you've added, you can assign a name, status (editing, reviewing, done, skipped), background color, and links. 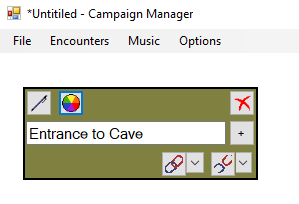 The + button on the encounter is how you get to the details. That's where you can add in links to files, websites, folders, text, checklists, and music.

Adding one of each... 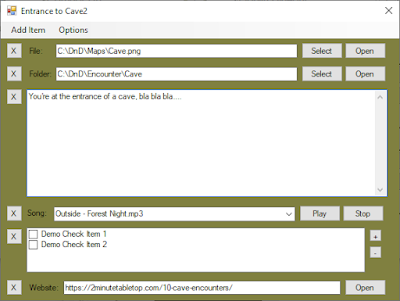 You can pick and choose which items to add and have multiples of the same type. So I could have several websites linking to a bunch of monster stats, notes describing what the area is to the player, and appropriate music ready to play with a single click.

And there are no limits to the number of encounters and how they're linked... 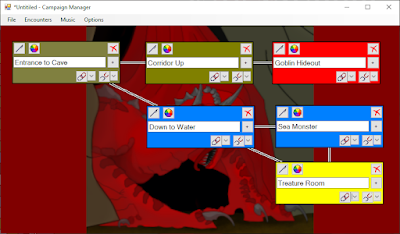 (Oh, and you can set the background color and image.) Scroll bars automatically appear as encounters are added / moved outside the current visible window.

The encounter details are (optionally always-on-top) separate forms that can be rearranged as desired. 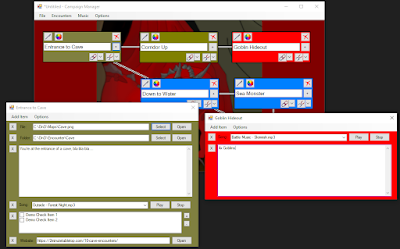 Future plans are a way to group encounters, sizable background images that can go behind encounters, easier ways to link encounters, and better ways to manage players with monsters / initiative order. I've got a couple other people that I'm hoping will try it out and give me feedback over the next couple months. Ultimately though I expect to publish it on itch.io for anyone to use.
Posted by Clint at 1:00 PM No comments: