Although CPU performance was improved to a solid 60 Hz, memory usage skyrocketed. 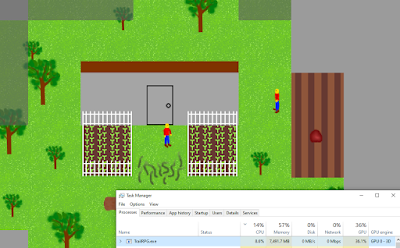 Each depth of the map has a ground tile and a canopy (roof) tile. When rendering the scene, the ground tile is drawn followed by characters followed by the canopy tile. That way a building roof can be drawn over characters.
For now we have 5 depths (that will grow) and 4 animations for terrain (that will likely increase as well). So: 5 depths x 2 (ground/canopy) x 4 (animations) = 40 tile maps.
I was generating at startup every one of those tile maps. That actually turned out to be totally unnecessary and very memory wasteful. To update all the tiles in a tile map from one level to another (8 in total) only takes a fraction of a second - barely noticeable. So I've replaced 40 tile maps with just the 8 that are in a single depth and the player has a trivial pause when the view switches between depths..
The difference in memory usage is unbelievable - 93% less: 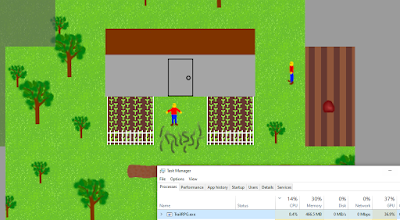 There were lots of graphical glitches with canopies, walking to the edges of building, and other UI elements not redrawing properly that I've also now fixed. Even though the game still looks awful, the underlying engine drawing it is becoming much more capable.
Also did a network test, 3 players all fighting in the world together!

The network test went great. Found a handful of bugs (including an especially funny one of dead players that weren't resurrected quickly getting transported to the middle of the world based on monster respawn logic) but the game was really fun.