For some encounters in my DnD group, I had been making paper battle maps with the occasional 3D structure. The issue was there were so many areas the players could get into combat and physical battle maps take so much time to produce. Also, I wanted to take it up a notch.

The latest new feature for Campaign Manager is the ability to display battle maps on a second screen for players to see / have their character minis on. 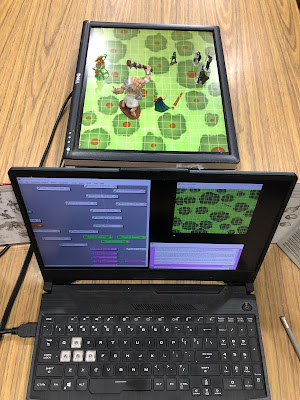 On the game master side, there is a "Player View Control" form to select which image to show, its scale and orientation, and an optional grid to draw. For convenience, it shows a cloned view of what the players will see.

A second "Player View" form is for the players. The view is ideally shown on a second monitor for the players - the form can be set to always on top with no borders to completely fill the screen.

I tried to streamline the setup as much as possible. If Campaign Manager detects a second monitor when you open the "Player View", it asks a single Yes/No question if to auto-configure. If you answer yes then it will open the Player View form on the second monitor, maximized, always on top, and black. Then I can select which battle map to use, but it's not shown to the players until I click the "Draw Player View" option.