Common in the older connect-to-your-television computers were joysticks. After all, those computers were really for playing games (yes, they were advertised as "educational" or for "work", but my TI-99/4A has built in joystick ports for a reason). The Asteroids game included in the Gameduino definitely convinced me I needed joysticks. Yes I could retrofit a classic Nintendo controller, or... I could build one from scratch.

I used Sketch Up to create a case. The case includes extruded mounts for the two boards and an opening for the serial connector: The lid for the case:

The extrusions at the 4 corners of the lid are so it doesn't have any play room to rotate or slide around the case. The extrusion in the middle is so I can put a set screw to secure the lid onto the case. It is opposite of the serial cable connection.

I used Repetier / Slic3r to create the G-code of my case: 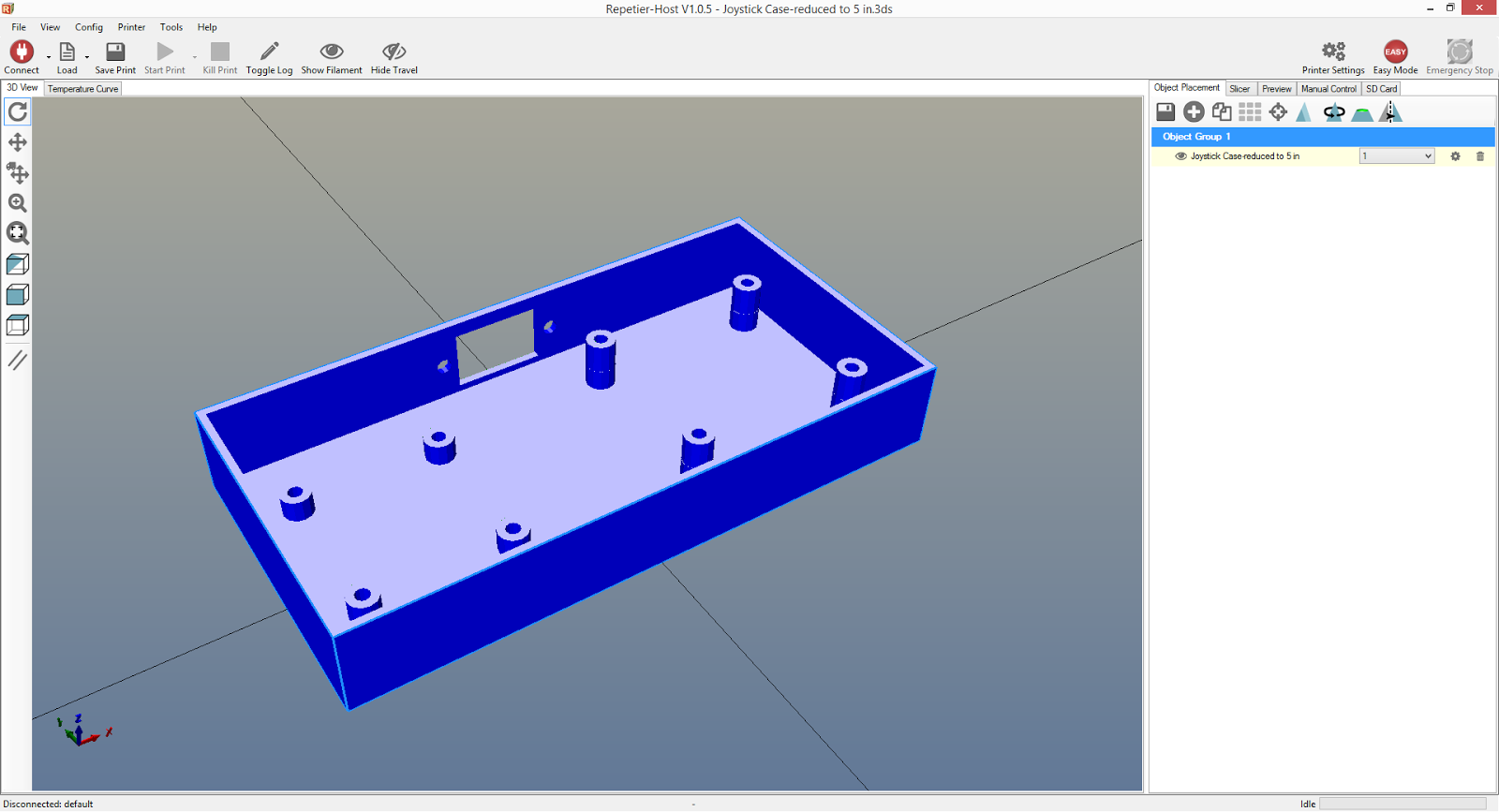 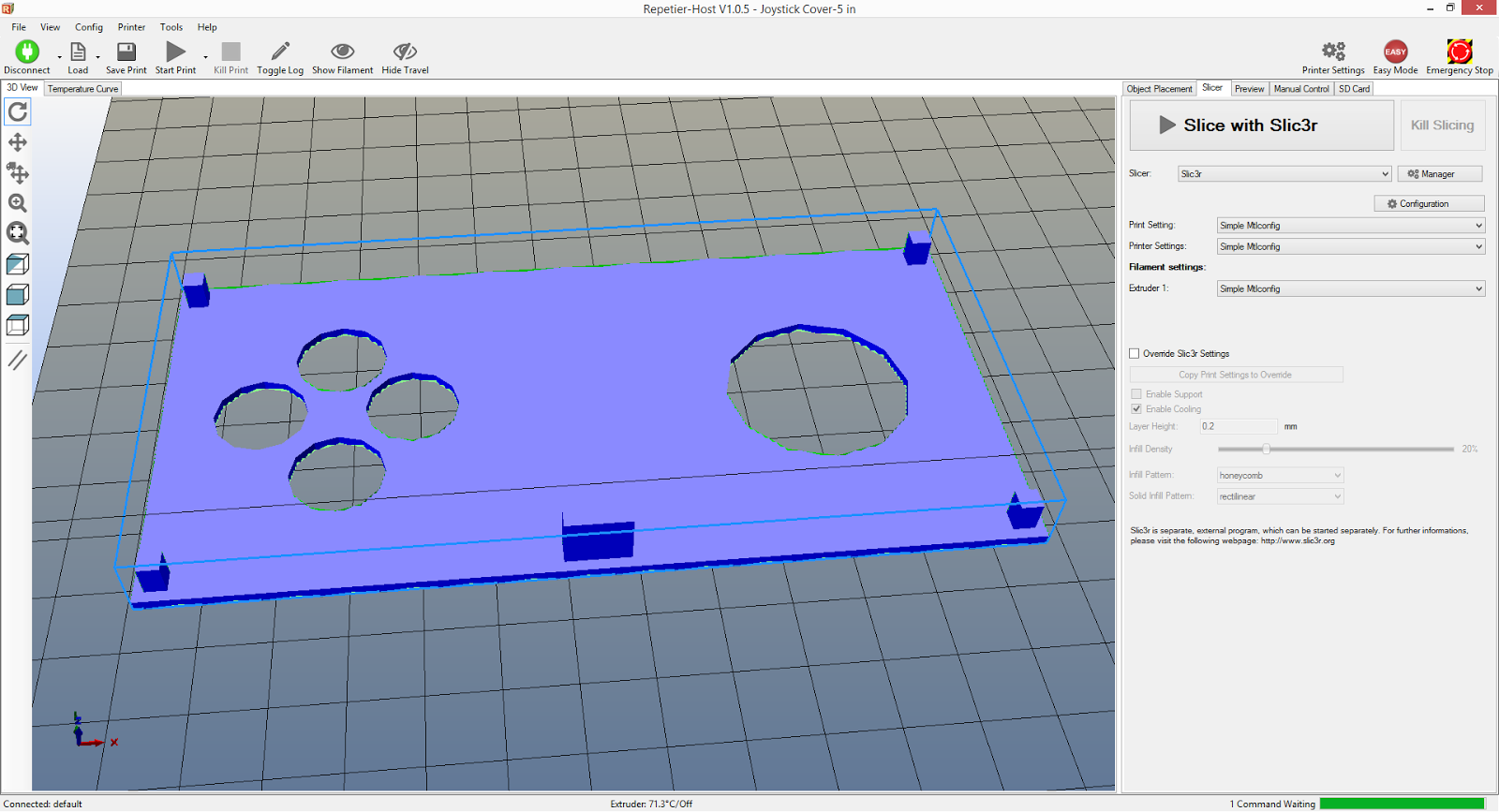 3 hours 4 minutes later I had my printed case! 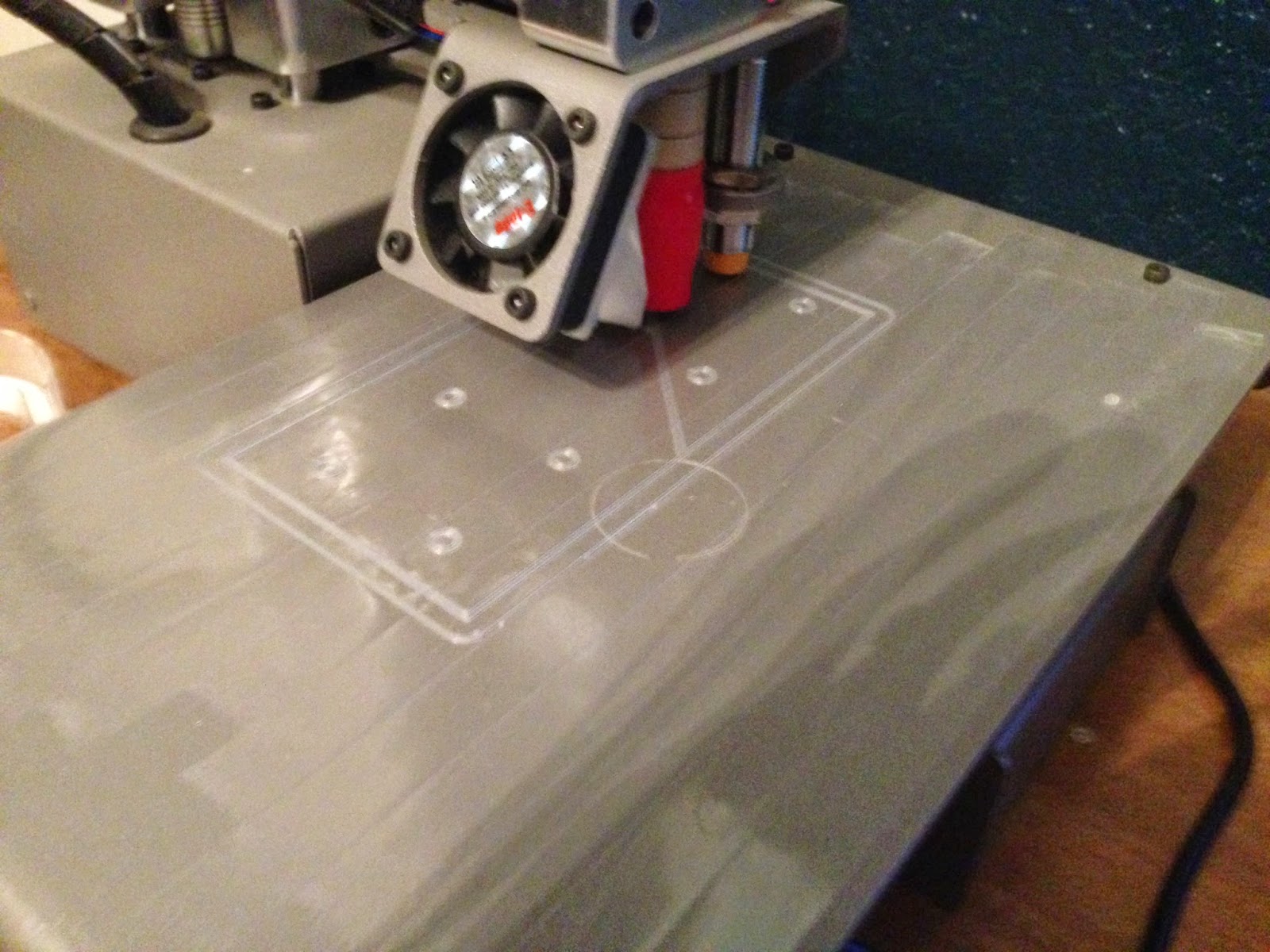 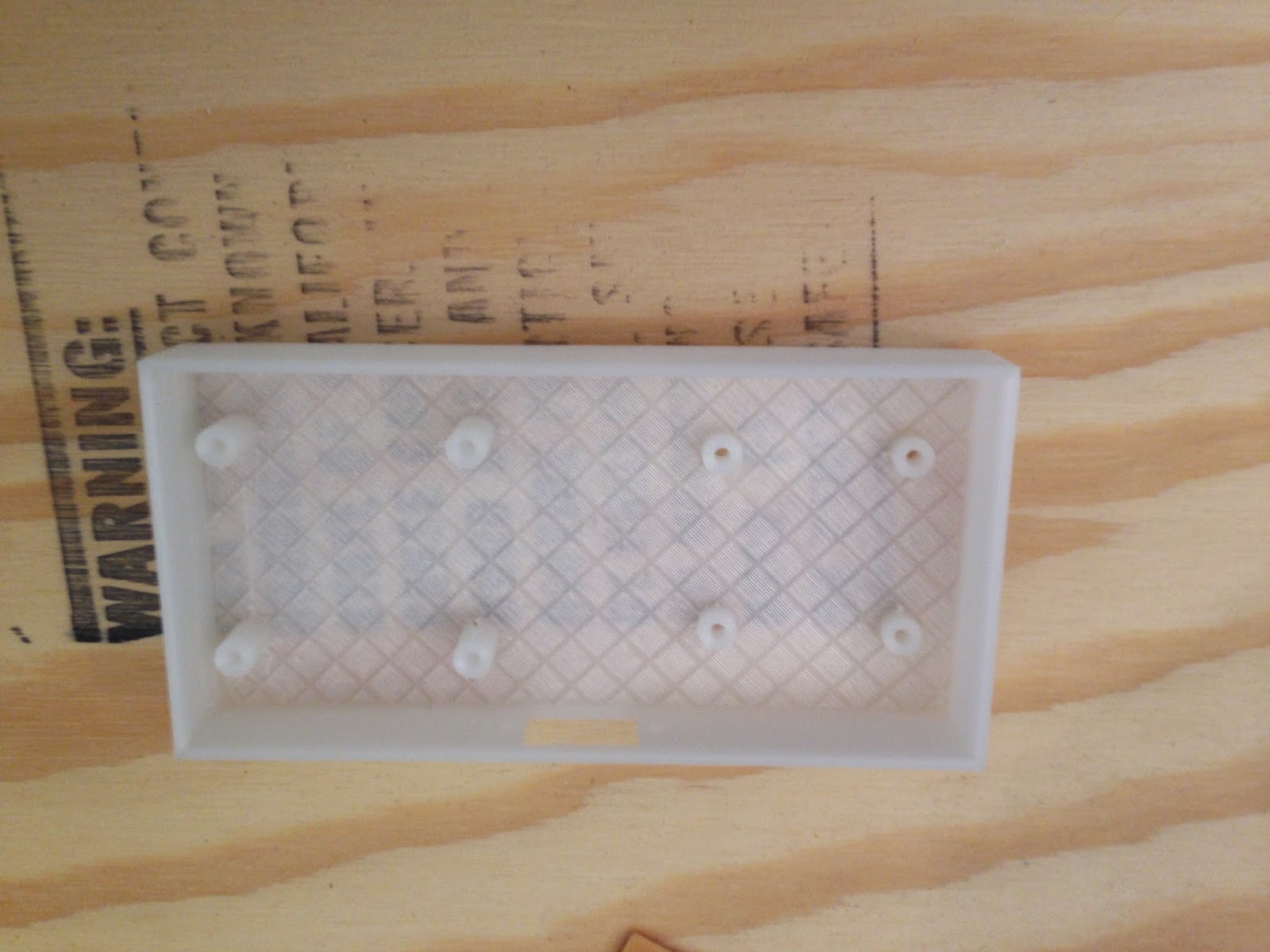 Well, one more hour for the lid. 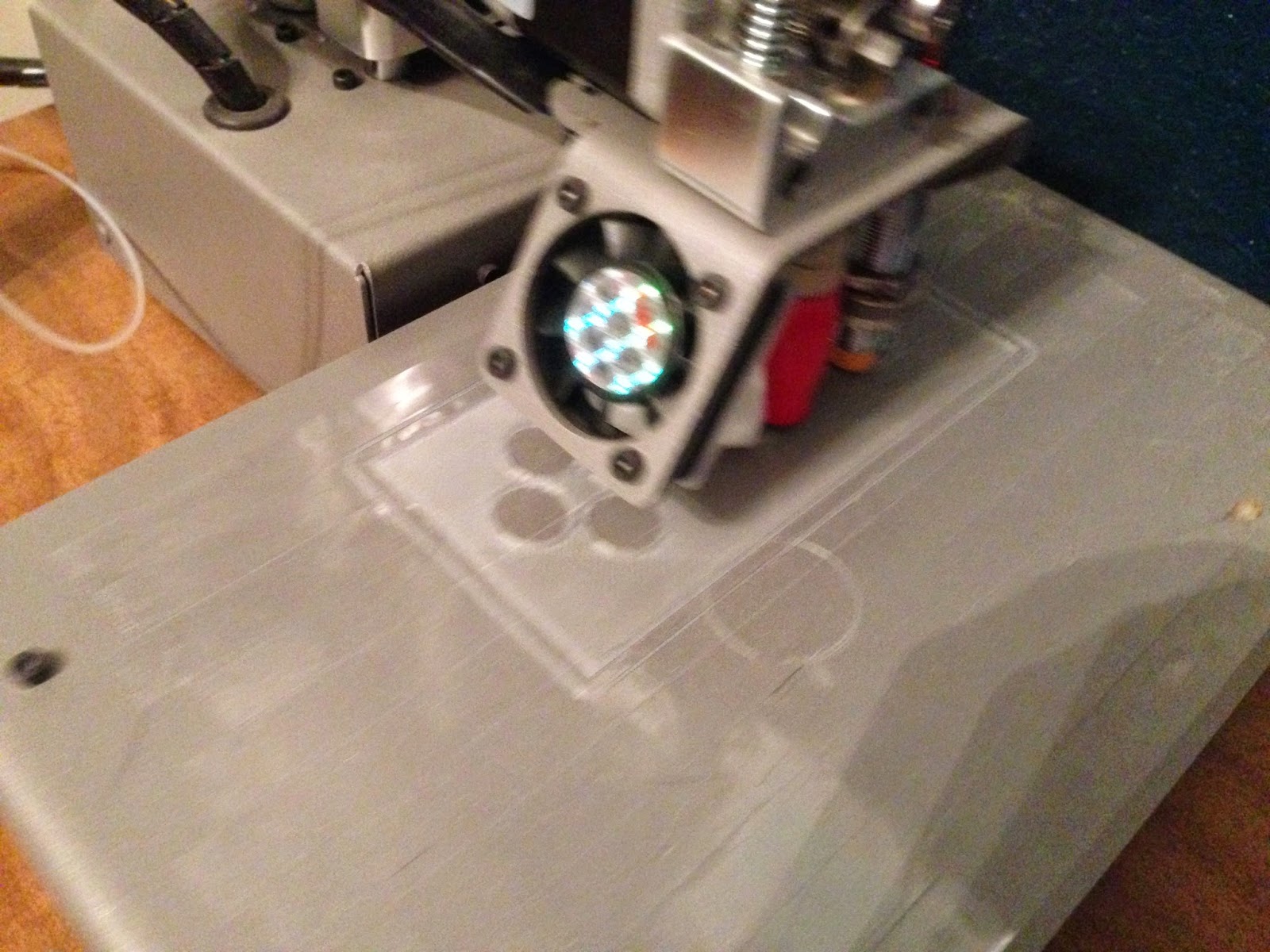 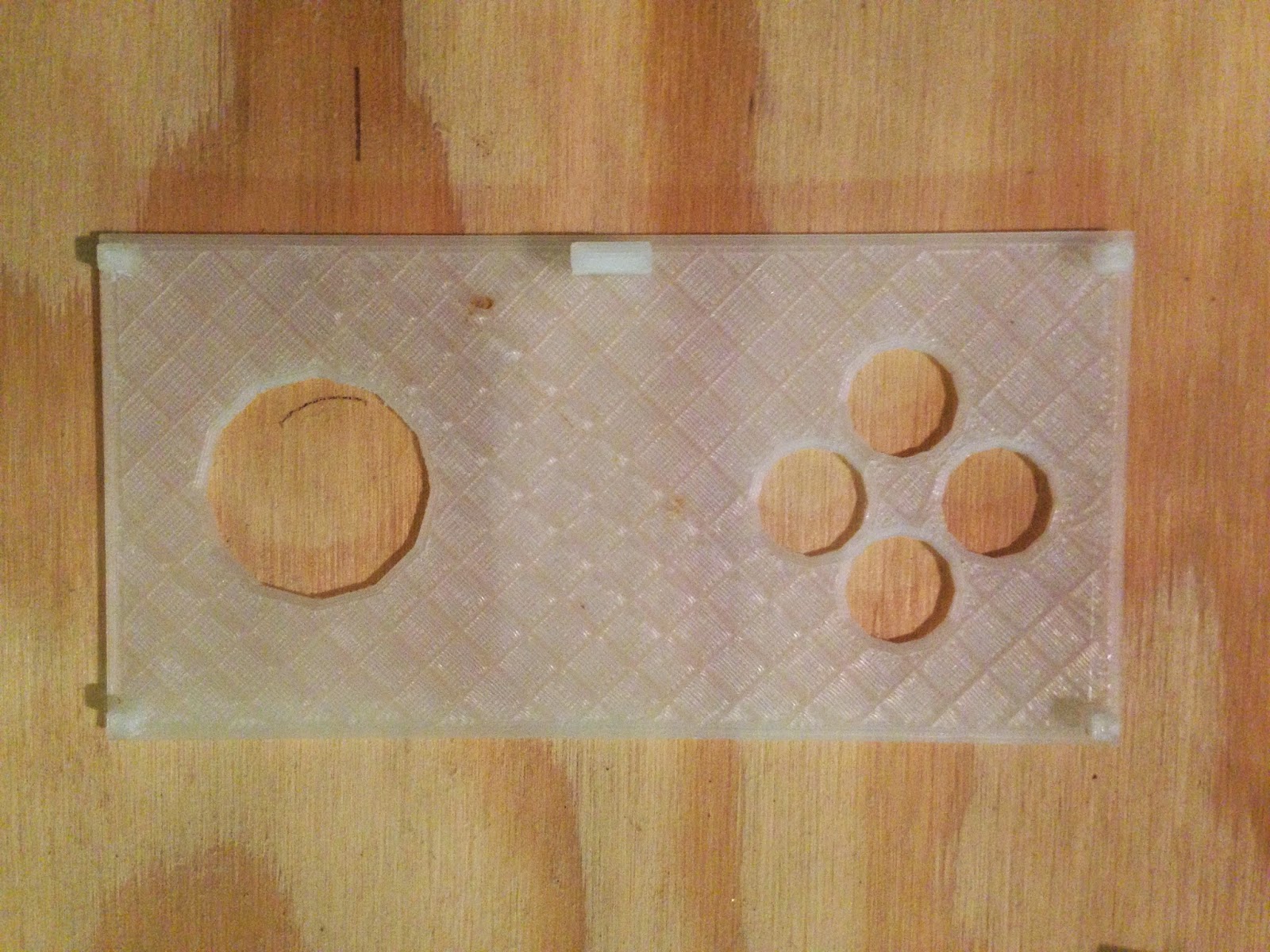 (There are all sorts of tips and tricks out there on how to get the first layer to stick to the print surface. I've found double sided tape to work very well. It's cheap and it easily comes off the finished part.)

I basically had to monitor the print for the entire 4 hours, someone is very interested in the printer...

The brains of the joystick will be with the Arduino. The joystick itself is basically just a collection of buttons and potentiometers wired to a serial cable. 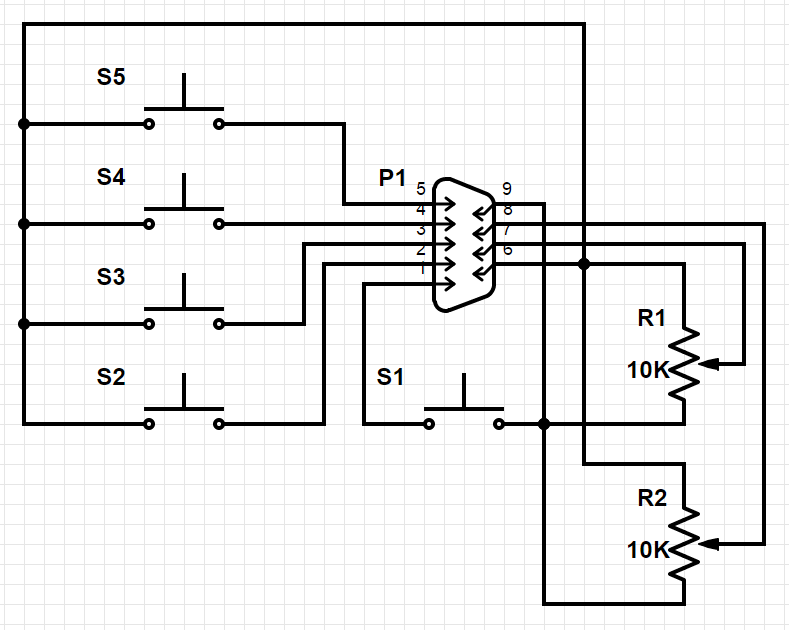 The pin layout for the serial cable is as follows: 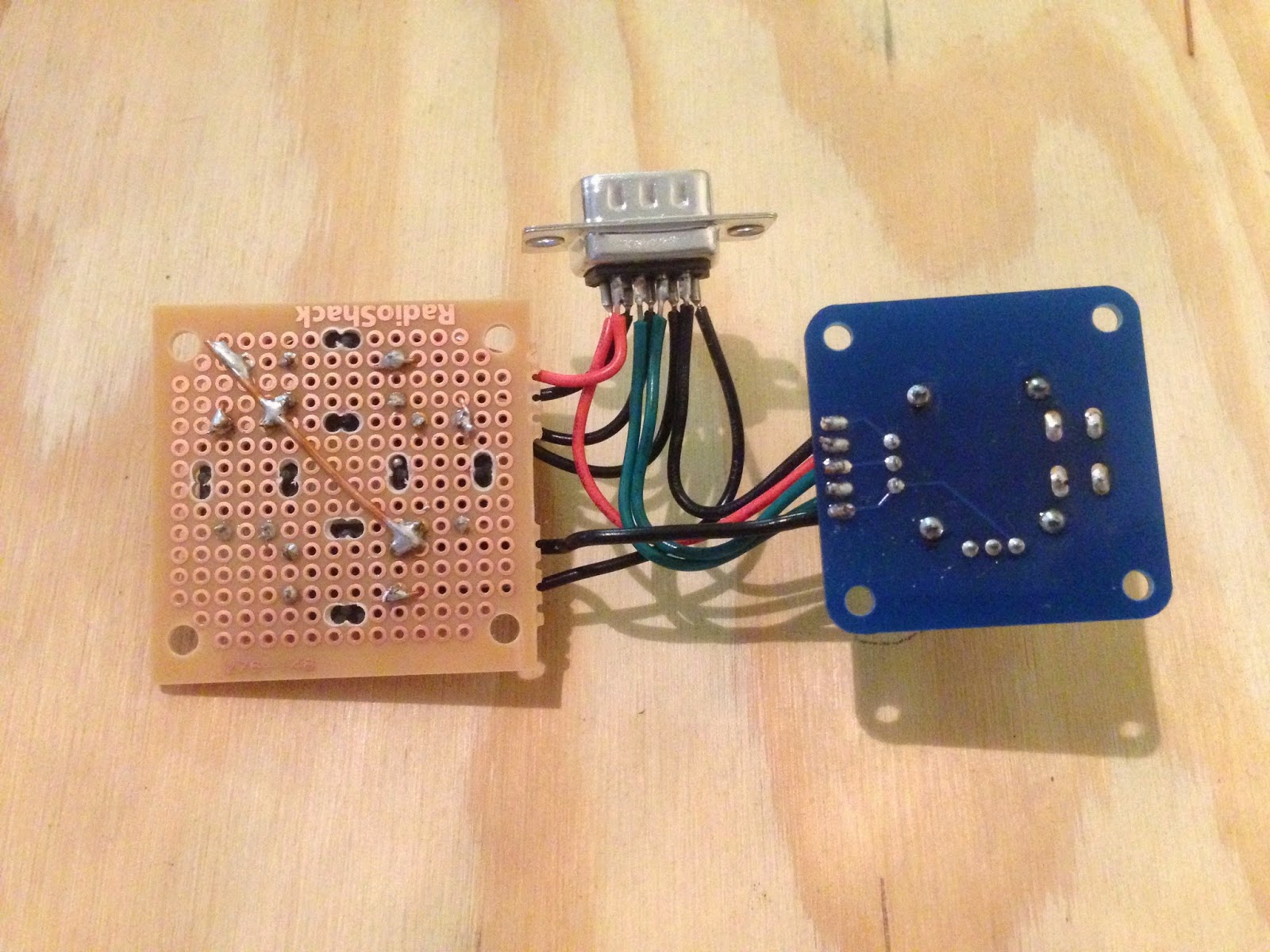 In the photo above you can see the Vcc long bare wire that makes connections across all the buttons. 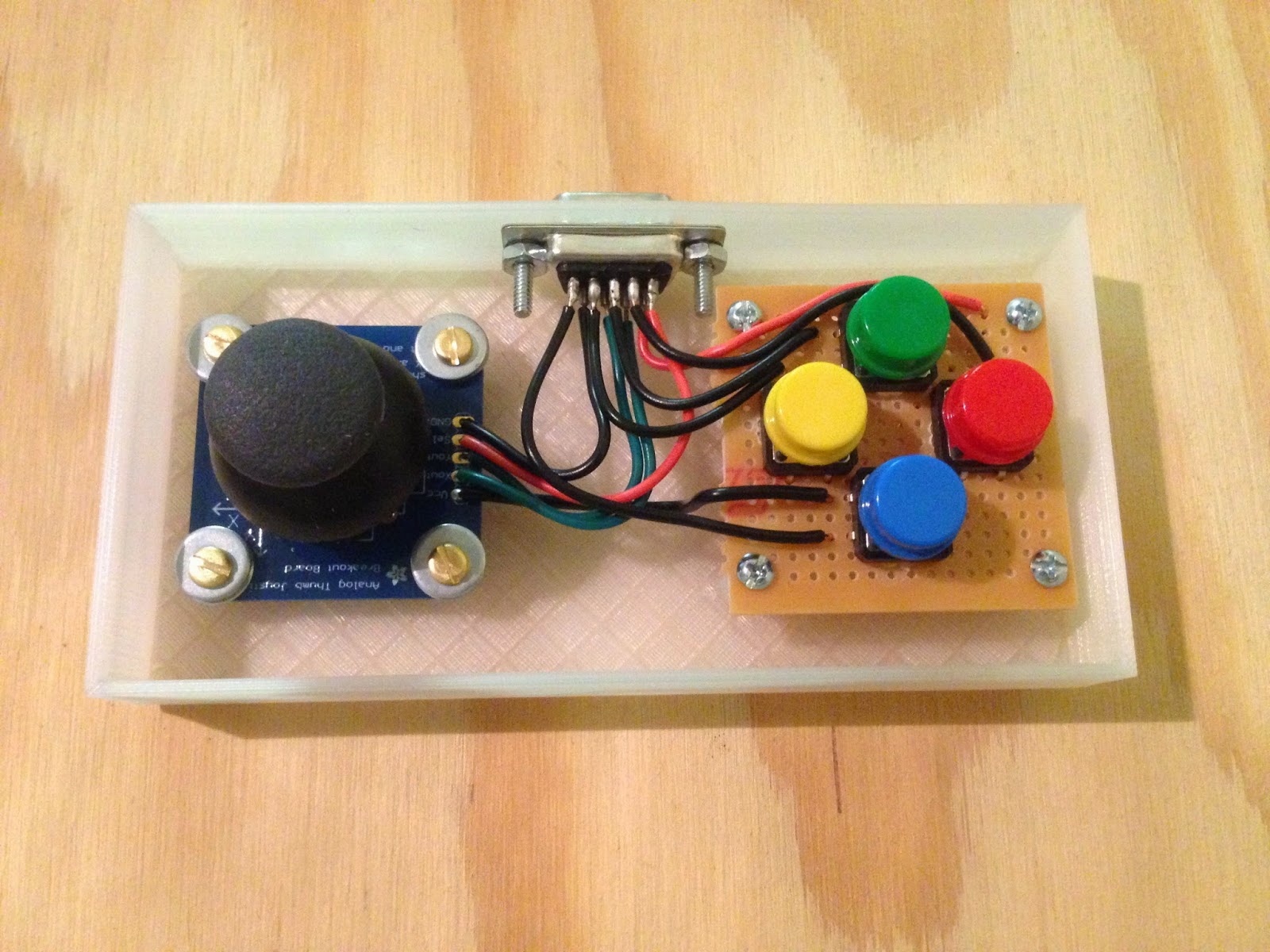 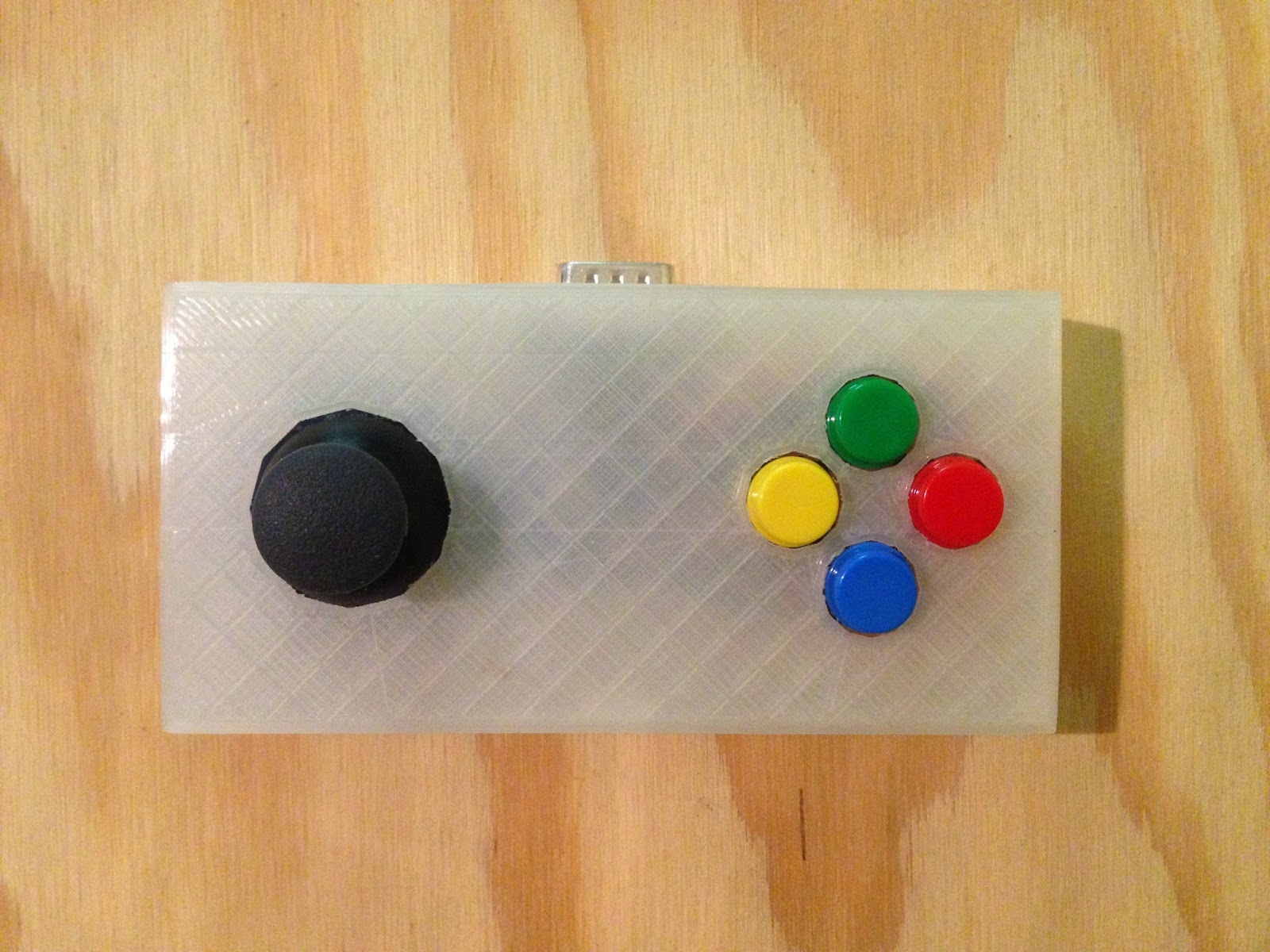 I was expecting to needs nuts for the mounting bolts, so I designed the case with the holes going all the way through. However I've found the #4 bolts fit snugly in the 1/8" diameter holes and no nuts were necessary. I did need a few washers for the bolts on the analog stick board as the 3/8" length bolts were too long and would protrude out (I suppose I could have found shorter bolts or dremeled the bolts in half, but washers were easier.)

The bottom turned out nice and flat.

The case came out pretty well, but there are a couple items that could be improved upon:

#1 Probably the most significant change needed is the analog stick. When in the neutral position it looks great, but as the stick tilts you can see behind the analog's cone cover. To prevent that, I need to have the overall case be thicker so I can put the lid higher over the analog stick. With the lid higher, I'd be able to use a smaller hole that closes around the analog stick's cone cover. Then as the stick tilts you wouldn't be able to look inside the case. I'd rather not have the controller be any bulkier though and really that's getting pretty nit-picky. For my purposes it's not a big deal.

#2 I could have gone a bit fancier with how the lid fits onto the case. Maybe cut some gaps in the case that the lid notches / snaps into? I'll think about it. The lid fits a bit tight right now. I need to give the lid's extrusions probably 1/16" or 1/32" clearance from the edges of the case so it fits in better and doesn't try to bow out.

This is just the first joystick; I've purchased enough parts to build a second for multiplayer. I'll give this first one some use and think about more tweaks before I construct the second.

Next up, the joystick wiring at the Arduino!