For my inventory system, I want to mimic the systems typically found in action RPGs, but they do have flaws I want to address.


Although there is some fun playing the Tetris minigame in Diablo 1 and 2, it does pull from the core mechanic of the game. So I'm going with a backpack where you can hold up to 10 items regardless of shape. (I might make it so you can page through and hold 20 or 30 items, we'll see how important inventory becomes...)

The downside is you can hold 10 broadswords or 10 rings, but either way you'll be maxed out of space. That will probably be ok. If the balance doesn't work well, I could implement an idea of encumbrance and/or weight to solve the issue. That way you'd be limited to maybe 3 broadswords before being over encumbered whereas 10 rings would no problem. I'll see how the game develops before implementing that.


For money, I'm having a separate purse that the player carries. Any money picked up will just go into that purse and not take up backpack slots. I'll set a maximum that can be held at a single time (to be determined as the game play gets worked out).

When someone carrying coins dies, a purse is left on the ground that can be picked up. Clicking the purse will transfer those coins into your own.


I think I've got a solid solution for Health and Mana potions. Diablo had the issue where you could put them on your belt, but they inevitably overwhelmed into your inventory. Thus taking the player back to Tetris and away from core gameplay.

But why are potions so freaking diluted with water? Concentrate that stuff, have a single potion bottle, and just take swigs of it when you need to!

In this screenshot the player has 7 drinks of health potion left and 3 drinks of mana potion left. 10 maximum for each.

And I've never been a fan of variable sized potions. Diablo/similar games had it balanced so that when your maximum hit points went up enough to take advantage of the bigger bottles also coincided when those bigger bottles became available also coincided with when you got enough money to afford them. So... what was the point? You'd always just get the best ones available.

If you take a swig of a health potion in my game, you get full health regardless of your maximum hit points. Sure I could make it so your maximum health went up and you could "buy" a bigger potion bottle, but it would be the same issue as in Diablo. By the time max hp goes up and bigger bottles become available your money is already up, so it's all an unnecessary wash.

And concerning health rejuvenating on its own - although it's convenient, it kills tension and disrupts gameplay (just flee for a bit, wait, then run back with full health). So I have zero plans on making health go up on its own. I don't think I can have mana go up on its own either as it will inevitable have the same issues as health. If you're trapped in a cave with low health and no supplies, I want you to keep that tension until you're actually out of the cave.


I loved Diablo 2's concept of swappable weapons. Have the bow at long range then a quick key press and you're ready for melee combat. Awesome. Diablo 3 ruined it... I played as a wizard and it didn't matter if I was holding a sword or a wand, it was shooting magic bolts. (Seriously I don't know how the designers degraded the game that severely.) So what weapons you're holding will matter in my game, and I'll present good reasons to equip a variety. 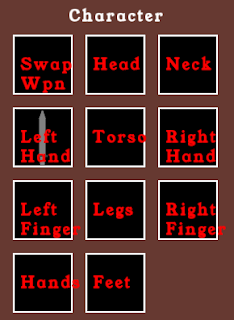 
And the current version of the inventory panel.... 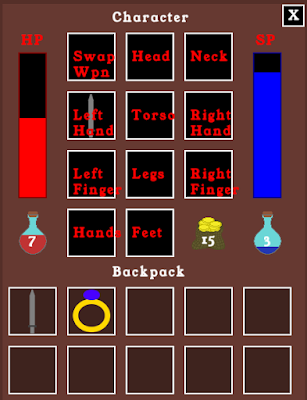