This past month has been building up the content of the starting area. In addition to your small farm, there are several other farms and houses, a town, a dangerous forest area, and a cave.

The initial tutorial part to teach the player how to use tactics, pickup weapons, and attack is still in place. But now I have a populated island where you really start playing the game.

What it looks like first leaving your house... (I'll cut down the player's visibility, but this vision is useful for debugging now.) 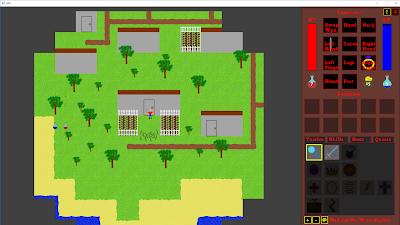 And the whole starting island... 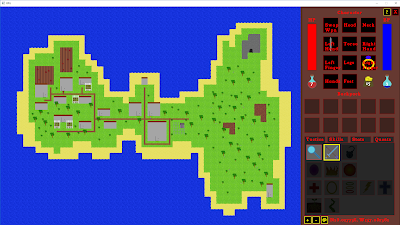 There's actually a good amount of planning in this island layout. You start at the southwestern portion, and there is a path leading you into town. If you follow the path great, it's safe and you can explore & talk to villagers. If you don't follow the path and instead go north you'll come across a farmer that has red slimes invading his crops... 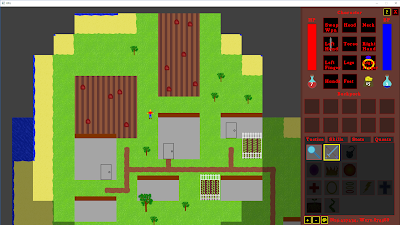 This is the first "quest"; he'll ask you to clear off the nasty slimes. The slimes can't move, so it's easy to flee / heal up to take them on one at a time. I don't have the farmer in yet, but I'll have him pay you for clearing his fields. I purposely have all fields that are fenced clear of slimes whereas the unprotected fields have the invaders.

Going east, the island pinches down to force you into the town. Town will have a shop (buy/sell items), inn (more quests), church (heal for free & learn a prayer based spell), and a port (to leave the island).

Beyond the town is the more dangerous portion - a forest full of rodents of unusual size. I suppose I could have fire spurting out of the ground, but that may be a bit too blatant ripoff. 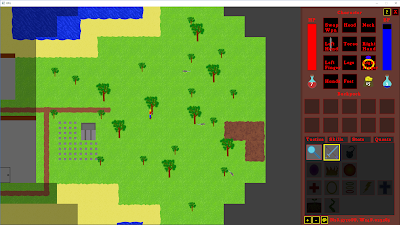 At the far southeast of the island is a witch's hut to learn a new spell.

Finally there is a cave in the northeast portion of the island that has the most dangerous creatures. 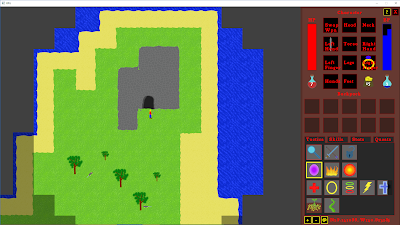 Descending to the bottom of the cave will have a chest of coins; enough to afford a ship off the island. 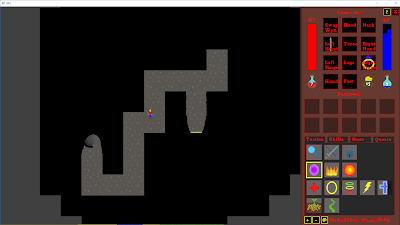 Alternatively, you'll be able to sell the rodent hides for money to also eventually buy a ship; safer but it will take much longer. I like giving the player options on how they leave the island.

As I've said before, all graphics are temporary. There will also be much more to do on the starting island. It needs to be interesting enough to hook players to want to get a ship to explore the rest of the world.
Posted by Clint at 2:34 AM