As I implemented more and more features, the performance went down and down. It got to the point that if I zoomed out all the way, my frame rate would drop to about 1 Hz. In my last post I detailed how my drawing went from thousands of individual draw calls to just a handful for the map. My performance jumped to the upper 30s but still far from where it should be.

The most CPU intensive operation was still drawing, but it was the user interface this time. Every frame every control item (button, text, bar, graphic) was redrawn; each having its own draw call. I reworked the drawing routine to draw all of those controls onto a single texture generated dynamically. Now instead of recalculating / redrawing all the controls every frame, I'm drawing the single dynamic texture every frame. If a control changes (text, visibility, color, etc.), then just that one control is updated onto the dynamic texture. After that change, I was able to get 60 Hz.... most of the time. 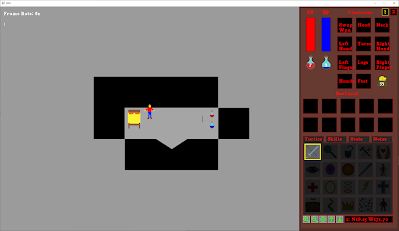 The last bottleneck was a simple bug in the A.I. logic that caused entities to check what to do every frame rather than every other second. Once that issue was fixed, I achieved 60 Hz in all cases in the game. Wohoo! 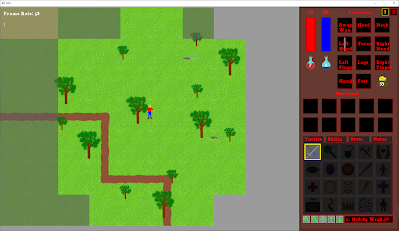 The CPU is still working harder than I'd like it to. I want the game to be able to run on relatively low powered computers, and I think lower end processors will fail to reach 60 Hz. So more to do, but at least right now it's buttery smooth for development!