I've made solid progress on my Campaign Manager this past month. I'm hoping I can polish it sufficiently in the next month to post it to itch.io for others to try.

Some of the latest improvements:

- You can now drag a window to multi-select encounters. And consistent with other Windows apps, if you hold down CTRL you can add or remove selected encounters. 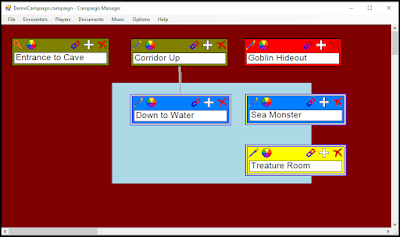 - Items within an encounter can be reordered and resized. (Arrow buttons on far right side.) 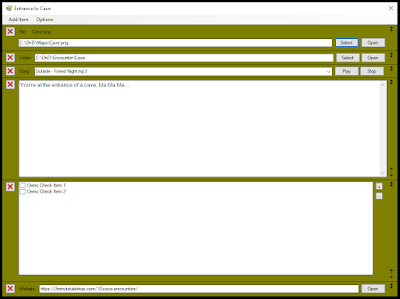 - You can define a player list for the whole campaign and a NPC list for each individual encounter.

- Then with a single click it can create a combat with automatically assigned initiative orders from the user entered Initiative Modifier values. Have the players report their initiatives and you're ready to combat. A "Health +/-" button is available to do the math for you as enemies are damaged or healed.

- I have several notepad files for my campaign that aren't encounter specific. Just notes of future campaign ideas, potential magical items, and player equipment. So now you can have a general notepad embedded in the campaign file to type anything you want.

- After each session with my players, I type out what we did so we have an easy reminder of where we left off for our next session (and so in a few years I can make a short book covering the entire adventure).

- And a whole bunch of other smaller changes.