Big feature update this month was adding the concept of "Assets" that can be imported and managed in the Campaign Manager. Rather than being campaign specific, these are characters/monsters, abilities/spells, and items/equipment that can be utilized by any campaign.

Wizards of the Coast publishes a "System Reference Document 5.1 (SRD5)" via the Open Game License that includes a huge library of monsters/spells/equipment for use in custom user created campaigns and applications. It doesn't have a few monsters such as Beholders nor does it include any proper names, locations, or religions, but it's still very comprehensive. There are some requirements that I must do such as making it very clear what is SRD5, including the license, and making the data accessible outside the program, but all of that is not a problem at all with my Campaign Manager.

So a new menu item has been added:

In that menu you can search through assets, import, create, and edit existing. Included in the software now is an "Example" custom asset to show what the the user can create and the ready-to-use "SRDv5.1". 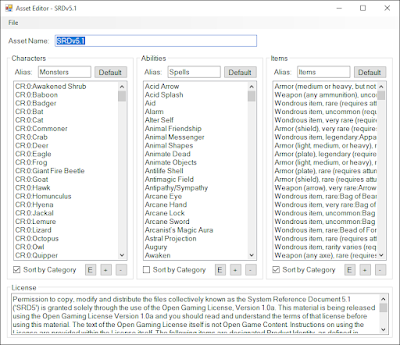 My favorite feature though is the search. Select Asset->Search or just CTRL+ALT+F and then start typing the name or category of a character, ability, or item. 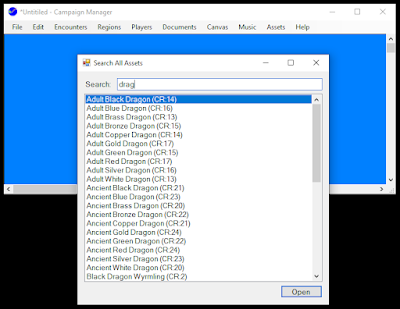 That's going to be sooo nice when a player casts a spell I don't remember the details of. A few key strokes and I have all its details ready to go. 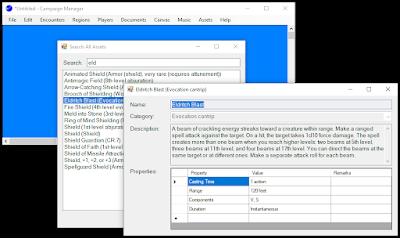 Next up is integration of all these assets with the rest of the campaign. I've got big plans on how to manage combat at encounters with these assets.
Posted by Clint at 1:14 PM