The Campaign Manager encounters had an ability to add "NPCs" and start a combat with them, but it didn't take advantage of the new assets. You had to manually type in the monster type, initiative, and hit points. This past month that "NPCs" item has been replaced by a new "Engagement" item: 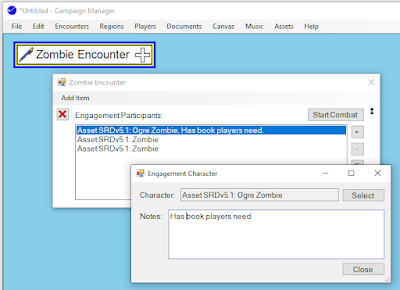 An "Engagement" is the combat of an encounter. You assign which NPCs and monsters that are part of the combat. When you click "Start Combat", it automatically pulls the hit points and initiative based on the monster types that were selected.

You can't assign maps and monster locations... yet... but that is on the short to-do list. This will be the method of getting a combat encounter ready for players.

The canvas of the Campaign Manager had the ability to pan around, but it was begging for the ability to quickly zoom in and out on it. That feature is now complete. Zoomed in: 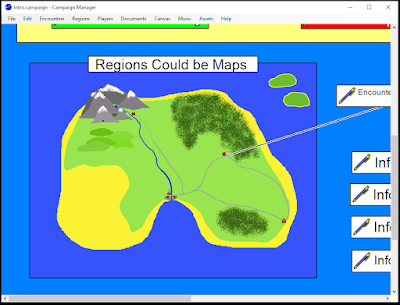 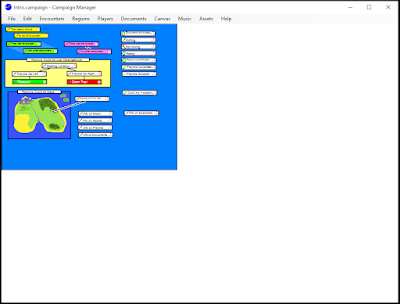 And not the most exciting feature, but I now have licensed royalty free music included with the Campaign Manager. I can now distribute the software freely without worrying about music legalities.

The music I have included is not as good as Table Top Audio (what I've been using in my own DnD campaign), but it's adequate. Thankfully users can copy in their own wav/mp3 files for the Campaign Manager to pull from (including from https://www.tabletopaudio.com/ ).