It rains aaaaaa llllloooooottttt in the winter time where I live (Pacific Northwest), but the summers are surprisingly dry. The house is on a well, so when we're out of power we're also out of water. Since I like to flush toilets even when I'm without power and since I keep planting trees down the hill that need water in the summer, it seemed like a good idea to capture some of the vast amounts of water that fall on the roof.


I found plenty of how-to resources online for smaller 50 gallon tanks, and if you're getting large 1,000+ gallon tanks you're probably calling in a professional. But I couldn't find much information / do-it-yourself tips on the medium size tanks. So here's my attempt and what I learned / tried...

As outside rain barrels, the tanks need to be opaque / dark enough such that light can't get in and have algae grow. I went with three dark green Norwesco 305 gallon tanks. These tanks have a good height vs diameter (bigger tanks had substantially larger diameters and would just look comical next to the house).

Tractor Supply has a decent selection of tanks in stock (unfortunately only in black), but they don't have the best prices. I found a supplier online in which three tanks shipped was the same cost as two from Tractor Supply (and dark green was an available color!).

There are some downsides to ordering online though. First, it took several weeks to arrive. And when they showed up... 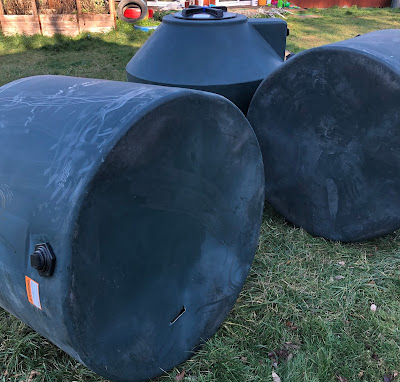 One of the tanks arrived with what must have been a fork lift gash in the bottom. (Always inspect your tanks before accepting delivery!) As soon as I flipped it over and the delivery guy saw it, there was a four letter word uttered and he got the ramp ready to load it back up. So it was nearly three more weeks before I got the replacement tank in.

To the company's credit, they had zero issue with the refused delivery and immediately worked to send out a replacement tank. I'd say if you're getting one tank, just picking up what's in stock at the local store is worth it. But even with the hassle of delivery it was quite a savings when buying three.

The tanks themselves are fairly light but obviously quite heavy when filled with water, so they need a decent foundation to sit on. (305 gallons x 8.345 pounds = 2,545 pounds + weight of the tank!

Unfortunately I didn't take pictures of these steps, but I excavated just under 8" of ground slightly larger than the tank radius, laid down landscape fabric, then filled my hole with pea gravel. Reading recommendations most places say 4"+ of gravel base. It was easy enough to dig a few more inches so I just went for double. There is a landscape supply company near my house that will dump a half yard (13.5 ft^3) of gravel in the bed of your truck for $16.75. Home Deposit sells 0.5 ft^3 bags of pea gravel for $4.48. Find a landscape supplier for large amounts of dirts, gravel, etc... it's so much cheaper than the big box store.

The landscape fabric is to help contain the pea gravel and minimize weeds from growing out of it. For the foundation ring I picked up 8" flashing from Home Depot and pop riveted it together. It's not the most perfect circle, but the flashing is holding the pea gravel in great. (The rocks you see outside the base in the photo just happened during shoveling.) Long term we'll see how well the flashing holds but so far it has worked great. 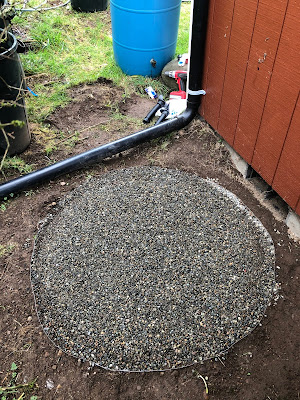 And two of the three tanks in place! Each tank is next to a downspout of the house. 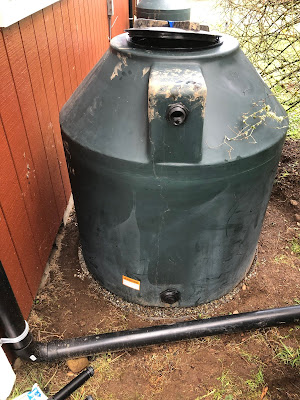 To capture the water, I went with: Aqua Barrel Round Downspout Diverter Kit

The reviews cautioned about leaves getting stuck in the downspout over time but otherwise very positive. The parts look great. 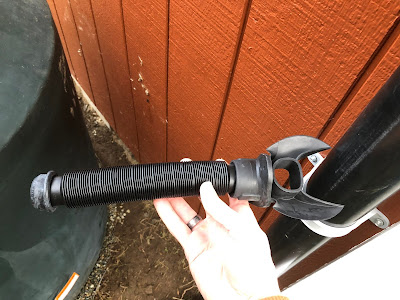 They have instructional videos that are quite easy to follow. Drill a hole 3" down from the top of the tank with the supplied medium sized drill bit. 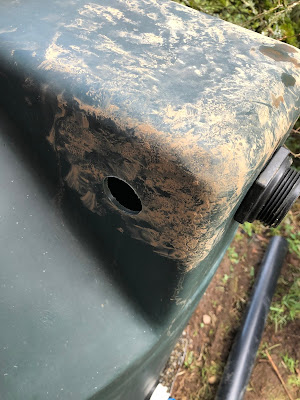 Go level to the downspout pipe. 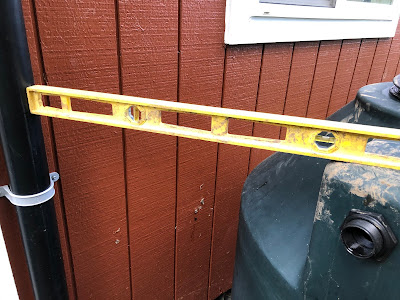 Then drill the diverter hole with the supplied largest drill bit. 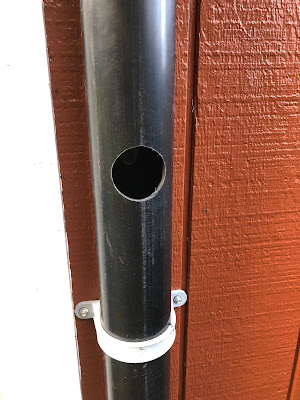 The diverter easily folds up to be pushed into the hole (and expands inside to match the curvature of the pipe). It's held in place by 2 screws. 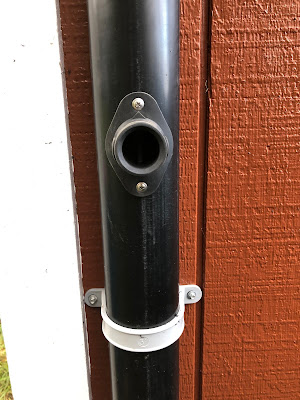 The kit comes with a spigot (black piece below) and a drill bit for the bottom of the tank, but I really don't want to put any more holes into the tank than absolutely necessary. And there was already a hole at the bottom, so trip to Tractor Supply to get reducer bushings to go from 2" down to 1.25" down to 0.75". Success! 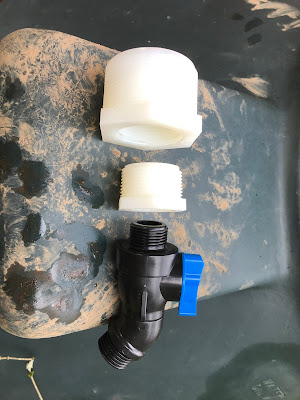 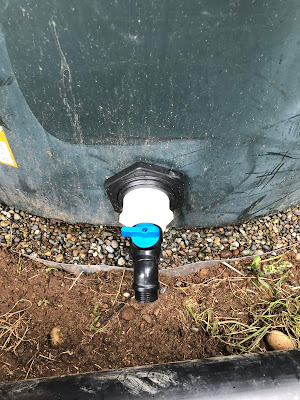 Tanks with all the hoses connected! 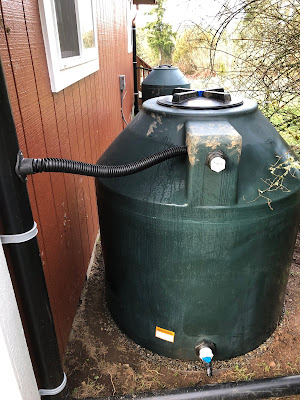 Here's the diverter hose off during a rain, the diverter works really well! It conforms to the inner lining of the pipe to divert that water into the hose. 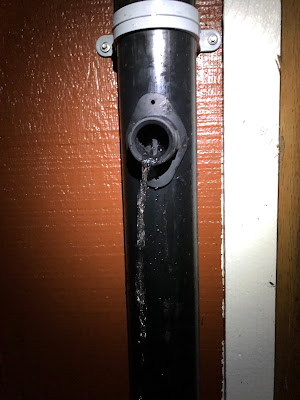 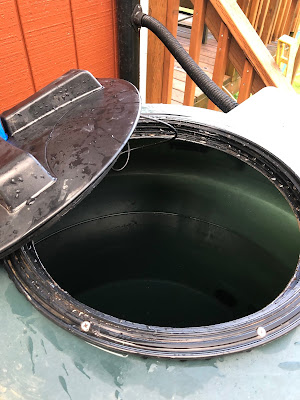 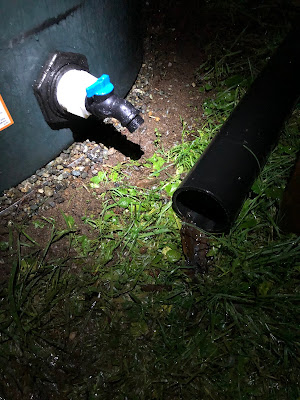 One of my tanks kept filling up then losing a good amount of its water down to the same level. Turned out there were tiny cracks near the bottom of the tank. At first glance they seemed inconsequential; a few marks. But once the tank filled a couple feet the pressure pushed the water through the cracks. The water level actually stabilized several inches above the crack. I didn't take a before picture, but it almost looks like someone just started to drill a hole then stopped.

No idea how long this will last, but I picked up some Flex Seal from Home Depot and slapped it on. Let's see if "Flex it and forget it" actually works... 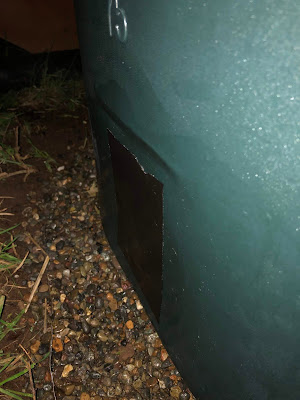 If the Flex Seal doesn't last, then I'll do a more proper patch.

** UPDATE ** Flex Seal does not flex it and forget it on these polyethylene tanks.  Another fix will have to be applied. ** UPDATE **

Final notes / things to watch:
- This is not potable (drinkable) water. I don't even have a "first flush" device on it (which I may add later). We'll see how clean the water stays throughout the year.
- It's recommended to cap rain barrels in the winter so they stay empty to prevent freezing. It gets cold where I'm at but rarely stays below freezing for long. It also takes quite a bit of cold weather to freeze 300 gallons (and those recommendations were for 50 gallon tanks), so I'm hoping my tanks can stay near full in the winter. When it gets cold I'll ensure there is room for expansion in the tank for whatever does freeze, but I'm going to try to not cap them. If a tank does begin to freeze then I'll throw in a trough heater temporarily and/or let it drain.
- Hopefully the flashing lasts and holds in the gravel.
- And of course I'll have to monitor the Flex Seal patch. ** UPDATE ** Flex Seal Failed ** UPDATE **

Overall though it will be very interesting to see how the rain collection works!