I'm going to have several quests on my starting island, but I noticed in the play tests that I didn't adequately lead players to the next task. Players should be able to go anywhere, but there should always be a hint of where to go next.

I've now rearranged the island such that after leaving your house, you can immediately see a fellow farmer and the slimes invading his crops. Also, the road leads past the farm for further encouragement to go in that direction and talk to him. 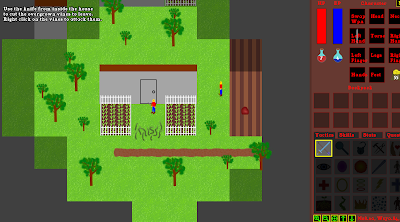 The other thing I wanted to do is demonstrate the "whole world" aspect of the game as soon as possible to the player. So now when you create a new game it starts at the whole world and does the smooth zoom in to the player's home and to the player himself. (Exact zoom rates will be adjusted later, but I like this intro to the game.)

Player movement / map manipulation is disabled until the intro zoom to the player has completed.

I added a couple UI improvements such as holding down the left mouse button to continuously walk (instead of having to click click click). And I no longer allow melee attacking on nothing. I noticed where you could click near (but not on a target), and the player would appear to be attacking it but really be hitting the ground next to it.

Finally the big engine update was externalizing items. I can now add items without changing any code - just create a png image and update a CSV file with the item name and its properties.