May has been a great month for improvements to the game. Invisible to the user was reworking memory to handle large numbers of terrain types, items, characters, and animations. Characters unarmed attack sounds were externalized along with timing of the weapon attacks.

On the visible side to the user are Attack Types and Resistances.

There are 6 damage types: blunt (a club), piercing (a dagger, bow), slashing (a sword), water, fire, and electricity. The last three are used in spell attacks and magical weapons.

Each character has its own unarmed damage types. My "rats of unusual size" do piercing damage for their unarmed attack whereas my humans do blunt unarmed attacks. Swords do slashing damage. Any weapon or spell can have any combination of any value of damage types. For example a Blizzard spell does blunt and water damage.

The attack stats are shown to the user; unarmed my player only has a blunt attack of 0.2 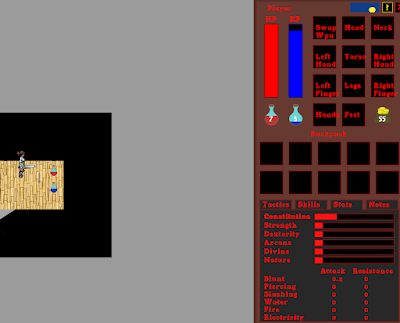 Armed with a sword my player has a slashing attack of 1. 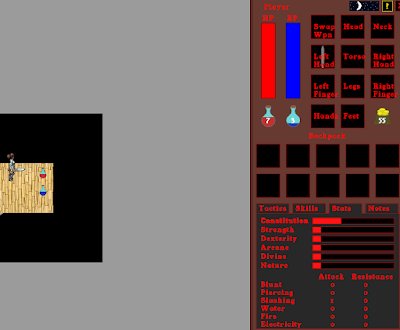 In addition to the attack type, each character has its own base resistance. For example trees are resistant to piercing and water damage. Items can adjust a character's resistance.

If I equip some armor, my blunt and piercing resistances go up. 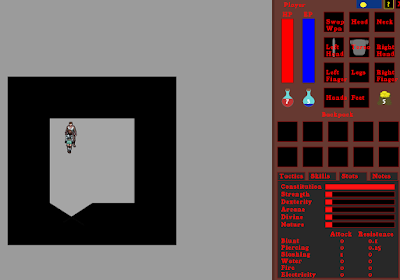 Skills are next up to be revamped, and I already have significant progress on them. That however will wait for the June update.