Stats in my game are things that can go up and down as you venture in the world. If you concentrate on melee combat, those stats will go up and spells will suffer. If you concentrate on spells, those stats will go up and melee combat will suffer. If you stay a balanced player using both, then all stats can be high, but it will be essentially impossible to keep them all maxed.

Skills though are something that you learn and never forget. Even getting knocked out, your stats may go down but your skills won't budge. Repeat from my post on stats: "You never forget how to ride a bike, but if you haven't been on one in a couple years you're not going to win the Tour De France."

I hate when games only allow you to pick a single skill to improve each time you level. I don't have a problem with requiring points in lower skills to unlock higher skills, but it's designed to force you to concentrate on one skill path. Trying to be a well rounded character or attempting to try all skills just means the "good" skills you want in the end game are never going to be as powerful as they could have been. This is my only real gripe with Diablo 2.

A few decades ago, I played a MUD (text based Internet telnet game) that had the best implementation of skills I'd ever seen. They were all in categories and subcategories, and improving a single item in a subcategory would benefit everything in the tree.

For example say there were short swords, broadswords, longswords, daggers, and spears as available melee weapons. And say my character mostly used a short sword but just started using a broadcast. His skill tree may look something like this:

Using any melee weapon increases the overall "Melee Weapons" value a little. With how much my character has used short swords and broadswords, the overall value has reached 5. Any subcategory of "Melee Weapons" will be at least 5 as well. Since my character hasn't used thrusting weapons, it's a 5 and each thrusting weapon is 5. Which makes sense... although the motion of a swinging weapon is very different vs a thrusting weapon, someone highly experienced in one can likely pick up the related melee weapon very quickly.

Digging down a bit further, short sword is the highest (because that is what my character practiced with most) followed by broadsword (next highest). My character has never used a longsword, but because he has so much experience in swinging weapons, he automatically has a skill level of 15 in that.

This was absolutely something I wanted in my game. I haven't broken it out to specific weapons, but skills are now categorized with subcategories. Improving a skill in a subcategory ultimately helps all skills in that category. 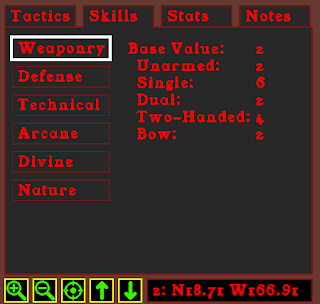 Spells are broken out as well... 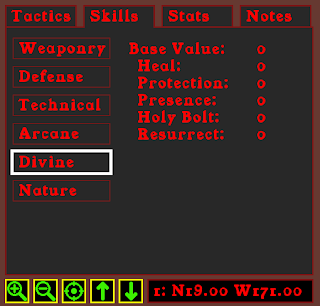 In the process of implementing the skills, I also added more capabilities. For defense, there is blocking and dodging. If you're holding a shield, it uses blocking. Otherwise it uses dodging. So now you can use shields in my game. 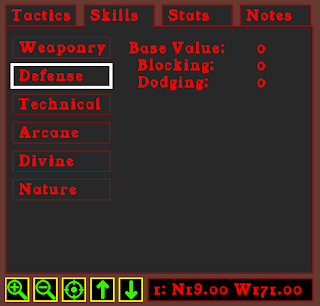 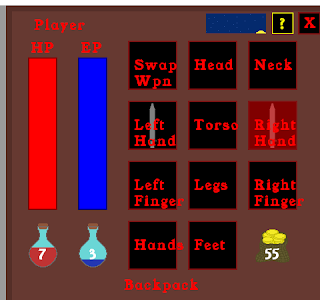 It becomes available and I get its full attack benefit. How about the one handed weapon and a shield?

Now players can have interesting combinations of two handed weapons, dual wielding weapons, or mixing single handed weapons and shields. The more they use a certain combination they more they'll improve with it, but they can still switch to other weapon types without it being a complete loss.
Posted by Clint at 10:10 AM